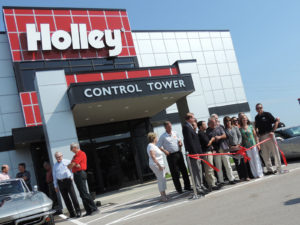 The National Corvette Museum, along with community leaders, Holley Performance Products and the Bowling Green Area Chamber of Commerce, celebrated the grand opening of the Holley Control Tower and Winding Road Racing Shop at the NCM Motorsports Park today with a ribbon cutting and facility tours.

The Holley Control Tower’s nearly 15,000 square feet contains a variety of functional spaces including retail space, a 2,000-square-foot viewing deck, administrative offices, meeting rooms and classrooms – classrooms and meeting spaces are available for rent for patrons to host meetings and private functions. The project broke ground in May of 2015 with a budget of $1.8 million.

“We want to be not only a recreational facility for automotive enthusiasts, but also a resource for the community,” said Mitch Wright, General Manager of the NCM Motorsports Park. “We are excited to add to the amenities that make this track a world class facility that can support such a variety of events.”

“We are very excited to see the activity that is going on at the NCM Motorsports Park and are thrilled the Holley Control Tower is a significant part of this amazing facility,” said Tom Tomlinson, Holley President and CEO. “This will be our second year to host a portion of Holley LS Fest at the facility. It is truly a world class track and it secures Bowling Green’s identify as a motorsports town. We are proud to be a part of that identity and want everyone to know it when they pull into the NCM track.”

Since opening, the 186-acre NCM Motorsports Park, located at 505 Grimes Road, has become a popular testing location for race teams and manufacturers. The park’s configuration flexibility is a big draw. The two tracks can be combined into four different configurations, ranging from a high-speed 1.96-mile loop to an extended 3.15-mile technical course. The technical track includes features derived from France’s famed Le Mans circuit.

“On behalf of our community, I extend congratulations to the Motorsports Park on the Holley Control Tower and Winding Road Racing Shop grand opening. Since August 2014, they have hosted many great events and I look forward to many more exciting, world class events right here in Bowling Green,” said Mayor Bruce Wilkerson.

“Our thriving automotive and motorsports industries in South Central Kentucky gained a little extra momentum today with the opening of the Holley Control Tower. This outstanding location will open the door to even more spectacular events for our region. I congratulate the NCM Motorsports Park and the National Corvette Museum on this newest development and I thank Holley for being a strong partner in continuing to support the growth of this community,” said Warren County Judge-Executive Mike Buchanon.

The National Corvette Museum and the NCM Motorsports Park serve as an anchor for Kentucky’s booming motorsports sector. In 2015, Kentucky reported $5.9 billion in automotive-related exports. Kentucky’s second-largest export sector is made up of motor vehicles and parts. In the last five years, motor vehicle-related investments of $5 billion have been announced in Kentucky, including nearly 20,000 new jobs.

“The NCM Motorsports Park is an increasingly popular destination for Corvette and motorsports enthusiasts alike and the addition of the Holley Control Tower is an important part of that development.  The addition of the Control Tower allows for the expansion of events and provides a first class venue for community events, such as our SCK LAUNCH Experience career expo event November 9th and 10th. We are pleased to celebrate the grand opening of this valuable addition to the park and community,” said Chamber of Commerce President and CEO Ron Bunch.

The NCM Motorsports Park and Holley Performance Products have both been essential to the Bowling Green Area Chamber of Commerce’s efforts to strengthen the local economy through its rich motorsports heritage. Both organizations are active participants in the Chamber’s motorsports committee and their support of the OnTrack initiative – an education partnership among the Chamber, Southcentral Kentucky Community and Technical College, Warren County Area Technical Center, Western Kentucky University and many of the region’s automotive-related companies – further solidifies the commitment to the future of motorsports in South Central Kentucky.

So far for 2016, the Bowling Green Area Chamber of Commerce has announced $359.5 million in capital investment and 440 new jobs in South Central Kentucky.

The control tower is the latest project to reach completion at the NCM Motorsports Park. The Kimberlee A. Fast Pavilion and garage complex opened last June and includes two sizes of garages that can be rented by the day, an open-air pavilion with restrooms, showers, picnic seating and concession area, and second-level viewing decks on the backs of the garages. A Mobil 1 Fueling Station also opened last summer and offers self-serve and pay for six different grades of fuel, including three racing fuels, diesel and 87 and 93 octanes. The NCM Motorsports Park opened in August 2014.

For more information on the NCM Motorsports Park, visit www.motorsportspark.org. 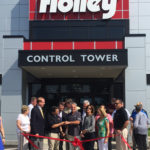 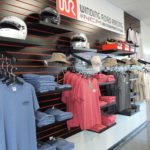 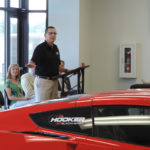 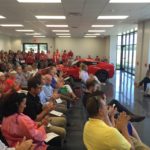 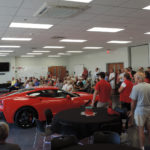 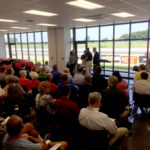 About the National Corvette Museum:

Since 1953 the Corvette has been America’s Sports Car. The National Corvette Museum was established as a 501(c)3 not-for-profit foundation with a mission of celebrating the invention of the Corvette; preserving its past, present and future; and educating the public about Corvette.  The Museum is open daily from 8 a.m. to 5 p.m. CT and is located at exit 28 off I-65 in Bowling Green, KY. For more information on the National Corvette Museum, visit www.corvettemuseum.org or call (800) 53-VETTE (83883).

About the NCM Motorsports Park:

Holley was founded in 1903 around the advent of the automobile and has been a supplier to every major American OEM automobile manufacturer. Holley supplied half of the fuel systems in WWII including those for land vehicles, marine and aircraft. Today Holley is the world’s largest maker of high performance products for the automotive aftermarket.  Holley’s famous carburetion has won more races than all others combined and their Electronic Fuel Injection is now standard equipment on Chevrolet’s COPO Camaro factory racecar and all NHRA Pro Stock cars.  Holley manufactures products under the famous brand names of Holley, MSD Ignition, Mr. Gasket, Hooker Headers, Flowtech exhaust, Accel Ignition, Earl’s Plumbing, NOS Nitrous Oxide Systems, Diablosport Tuners, Superchips Tuners, Edge Tuners, Racepak, Lakewood, Hays Clutches, and Weiand intakes and superchargers and more. For more information about Holley, visit their website at www.holley.com.

About the Bowling Green Area Chamber of Commerce:

Incorporated in 1935, the Bowling Green Area Chamber of Commerce is a 5-Star Accredited Chamber by the U.S. Chamber of Commerce and was named the 2009 Chamber of the Year by the American Chamber of Commerce Executives. As the fourth largest chamber in Kentucky, the Chamber serves as a premier business advocate for its more than 1,200 partners and is the driving force for economic development in South Central Kentucky. Its primary goals are to promote growth and success in the business community, reaching its small business partners and those in large industries alike. With leadership programs, governmental relations projects, educational initiatives and involvement opportunities, the Chamber aims to support the community and its neighbors in order to enhance the business climate and continue to grow the region. Learn more about South Central Kentucky’s advantages at www.southcentralky.com. 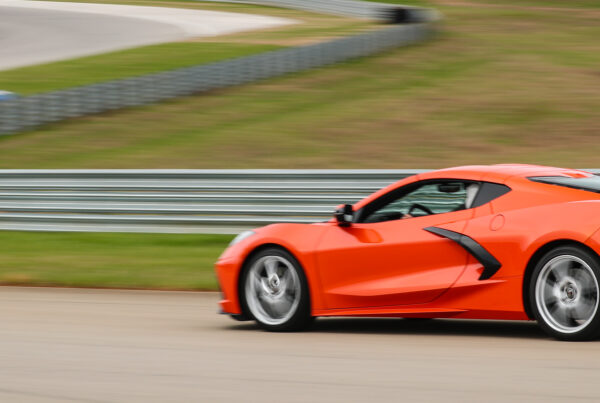