On June 21, 2018 Donald Duncan’s phone rang. His wife, Candy, answered, telling Don it was a call from Bowling Green. “Hi Donald, this is Katie from the National Corvette Museum, do you know why I might be calling you today?” It was a Corvette raffle drawing day, and Don had purchased a ticket to win a 2019 Arctic White Grand Sport Convertible. Seemingly not surprised at all, Don answered with, “Probably the same reason you called me about four years ago!” Clearly stunned, Katie then asked Don if he had won a Corvette from the National Corvette Museum before. Indeed, Don had. 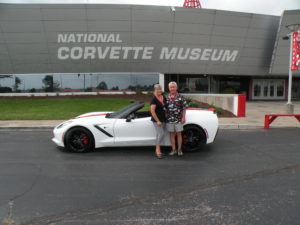 Don and Candy Duncan taking delivery of the 2014 Corvette they won in a raffle.

In 2014, the National Corvette Museum was celebrating their 20th Anniversary. As part of the festivities, two commemorative, one-of-a-kind Corvettes were to be raffled off as fundraisers for the Museum. The first, a 2014 Torch Red Coupe with special features by Corvette Exterior Designer Kirk Bennion. And the second, it’s sister car, a 2014 Arctic White Convertible, also with special features by Bennion.

Don and Candy of Comfort, Texas had traveled to Louisville, Kentucky in July of 2014 for a Vietnam helicopter pilot association reunion when they were encouraged to stop in at the Museum on their way home.

“My best friend in Vietnam was a Corvette nut, and I had a Jaguar XKE Roadster at time,” said Don. “So, my friend Bob says to me at the reunion, ‘how are you going home?’ And I say, ‘we’re going down through Bowling Green.’ He said ‘you’ve gotta stop at the Corvette Museum.’ I said, ‘alright, we will.’ And we did. We stopped, we came in, we toured the Museum and we learned about the raffles. I’d never heard of raffles. So, we got home, and we bought a ticket. And then we bought another ticket.”

Other than a very brief ownership of a 1965 Corvette, purchased used many years ago when Don was in the military, the Duncan’s had not owned a Corvette since. With tickets in the drum for both commemorative Museum Anniversary Corvettes, Don and Candy were glued to their phones the day of the first drawing (the Torch Red), sporting their Corvette t-shirts, hoping to win. “We were waiting for a phone call. And we wait, and we wait, and then think oh well, we didn’t win that,” said Don. “The next day, we take a nap. We were napping when the phone rang, and Candy jumped up and answered the phone and it says Bowling Green. We don’t know anyone else there.”

It was their lucky ticket #46 that won them the iconic white with red interior convertible (designed to be a throw-back to the first 1953 Corvettes).

After winning the Corvette in 2014, they took a break from purchasing raffle tickets, starting back up a couple years ago. “I like white cars, and convertibles and Grand Sports,” he added. Ironically, when they received the call about their 2019 win, they had just ordered a new Corvette for Candy – a 2019 Arctic White Grand Sport Convertible.

With limited space in their garage, and the fact that their 2014 Corvette didn’t get driven much (partly because it was a manual), the idea of donating it sounded like a good one. “Why not give it back to the Museum,” said Don. But the idea of donating it came up even before winning the second Corvette. “He’d even talked about donating this next year, that was already in the back of his mind to do that,” said Candy.

The couple decided to donate the 2014, the first C7 that the Museum would own, in conjunction with taking R8C Museum Delivery of Candy’s Grand Sport on Tuesday, November 13. The 2014 is now being displayed in the Museum’s Skydome as part of the Generations display, representing the seventh generation.

Thank you to Don and Candy Duncan for their generosity! We’re excited to welcome back such a special car to the Museum (and just in time for the 25th Anniversary of the Museum in 2019)!

Video of Don receiving the phone call that he won a Corvette:

Video of Don donated the Corvette: 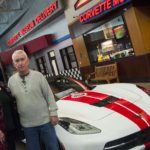 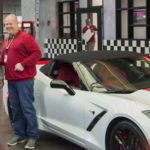 The Duncan’s donated their Corvette prior to taking delivery of their new 2019. 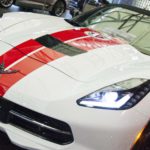