Today the National Corvette Museum celebrates International Women’s Day by honoring several iconic women who’ve made a positive impact throughout the Corvette community. Three of the four honorees are in the Corvette Hall of Fame, while the fourth is representative of a newly-founded women’s organization here at the NCM. The contributions Dollie Cole, Donna Mae Mims, Betty Skelton, and Elfi Wolfe Duntov have made to Corvette world are each significant in their own right. 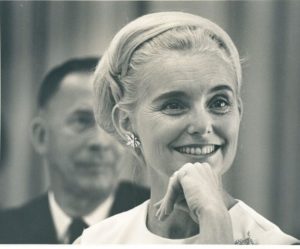 While the world at large first came to know Dollie as the wife of Edward N. Cole, President of General Motors, she wasn’t the kind of automobile executive wife to let that be the one thing that defined her. Colorful, beautiful, driven and outspoken, she truly did live life to the fullest, building up a resume of accomplishments that included: accredited test driver and pilot, Senior Editor for a publishing company, author, television host, and she was even a model in print ads for Dr. Pepper. She could work out in the barn all day, and step into the most elite social situation without missing a beat. She was engaging and comfortable with anyone she met regardless of their station in life. She made it a point to make people feel valued whether it be an underprivileged child, the elevator operator, a Hollywood celebrity, top race car drivers, powerful business icons, or even the President of the United States. They all mattered to her, especially those who were defenseless–mainly children and animals. It would be the goal of her life to use her resources, abilities, time and energy to help them rather than looking for ways to be entertained. After her husband’s tragic death, Dollie became a cheerleader of sorts for Corvette.

Dollie passed away on August 24, 2014, leaving behind her children, William Jefferson McVey, III, Anne Cole Pierce, Esq., Robert Michael Joseph Cole and Edward Nicholas Cole, Jr., as well as a grateful family of Corvette enthusiasts who will always be in her debt. Dolle Cole was inducted into the Corvette Hall of Fame in 2019, where she joined her husband, Ed Cole, Corvette Hall of Fame Inductee from 1998. To learn more about Dolle Cole click here. 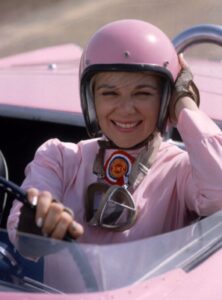 Affectionately known as “The Lady in Pink,” the late Donna Mae Mims became a true Corvette enthusiast from the first moment she spotted one, a 1957 Corvette, for sale on a dealership lot. At the time she and husband Mike had never heard of the model, but ended up purchasing a brand new one from Don Yenko Chevrolet. An invitation from a fellow motorist to a sports car meeting is what got Mims involved in SCCA, and in 1961 she started racing, winning the B Production national race that same year at Cumberland. While Mims liked her Corvette, she was not fond of the color. Her husband would not let her paint it pink, so she painted ‘Think Pink’ on its side. Her subsequent race cars bore the same name, while Mims sported pink coveralls, a pink crash helmet, and full pink wig behind the wheel. In her championship driving year, she was part of the Yenko/Chevrolet race team that dominated A/Production and B/Production SCCA racing with Corvettes, all while she was driving her little pink H/Production bug-eyed Sprite. Her dedication to racing was not only recreational, but also professional, serving as Manager of Hi-Performance at Yenko Sports Cars.

After retiring from racing in 1974, Mims stayed busy as a worker in Race Control at three Ohio race courses, and remained active in events of the Steel Cities SCCA Region, Corvette Club of Western Pennsylvania, Three Rivers Corvette Club (which she founded), Steeltown Corvette Club, and the Tri-Rivers Car Club Council. Donna Mae Mims was inducted into the Corvette Hall of Fame in 2016. To learn more about Donna Mae Mims click here.

Betty Skelton (Frankman), frequently referred to as the “first lady of firsts”, worked side-by-side with some of the biggest names in Corvette, and established unbelievable records of her own in racing, aviation and automotive history. The first woman to be inducted into the Corvette Hall of Fame was also the first woman in the world to drive racing cars to new records through the famous NASCAR measured mile on the sands of Daytona Beach. Skelton established records for Chevrolet behind the wheel of the Corvette, and appeared at major auto shows, as well as national ads and TV commercials. 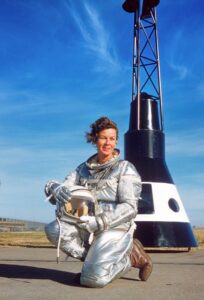 Harley Earl at the GM Tech Center along with Bill Mitchell, designed a special Corvette for Betty in 1956-57. Skelton drove the translucent gold Corvette to Daytona for Speed Week and then paced all the NASCAR races with it in 1957. In 1959, she was invited by NASA to become the first woman to undergo physical and psychological testing for the first seven astronauts, and was directly involved with arranging America’s first astronauts to become Corvette Owners. Betty Skelton is represented in Hall of Fames and Museums throughout the United States but way inducted into the Corvette Hall of Fame in 2001. To learn more about Betty Skelton click here.

Elfi Duntov is considered the Godmother and First Lady of Corvette. She would often accompany Zora Arkus-Duntov, the first Chief Engineer of Corvette, to car shows and special events. Everyone who met Elfi was immediately impressed with her grace, enthusiasm and knowledge of America’s Sports Car. She attended the Grand Opening of the National Corvette Museum in 1994 and plays a pivotal role in the story of the Corvette. It is an honor to attach her name to this new society – to continue her legacy of philanthropy among like-minded women in the Corvette family.In 1965, Corvette introduced a new and exciting color – Silver Pearl. It was sleek, elegant and powerful, much like the women who love Corvette! Pearls symbolize wisdom acquired through experience as well as generosity, integrity and loyalty. While pearls make the perfect complement to flashier gemstones, they also possess an elegance that can shine alone. Although Elfi is not a member of the Corvette Hall of Fame, a special women’s organization was named in her honor, Elfi’s Silver Pearl Sisterhood. 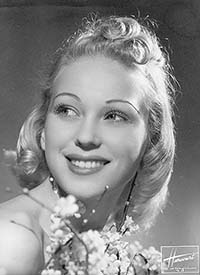 Elfi’s Silver Pearl Sisterhood is a group of women with a shared passion for Corvette, who enjoy celebrating the Corvette experience, uniting with other Corvette enthusiasts, promoting the traditions of America’s Sports Car, and collaborating to advance the mission of the National Corvette Museum. Members pool their financial gifts and allocate the funds to a project or program at the Museum to maximize the impact of their philanthropy. Each member of the group has a unique opportunity to be connected to other women who are enthusiastic about all things Corvette, and to learn about the Museum’s priorities and initiatives in a group setting specifically geared toward women. Members have an equal voice on how the pooled funds are utilized annually. A member may be as involved as she wishes, from serving as an ambassador to simply making a financial gift. To learn more about Elfi’s Silver Pearl Sisterhood click here.

In the end, each of these four women represented the connection between women and Corvette. Presently, women like Nora Roper, Assistant Plant Manager of the Bowling Green Assembly Plant, Laura Klauser, Sports Car Racing Program Manager at General Motors, and Mary Barra, Chairman and Chief Executive Officer at General Motors continue to pave the way for the next generation. 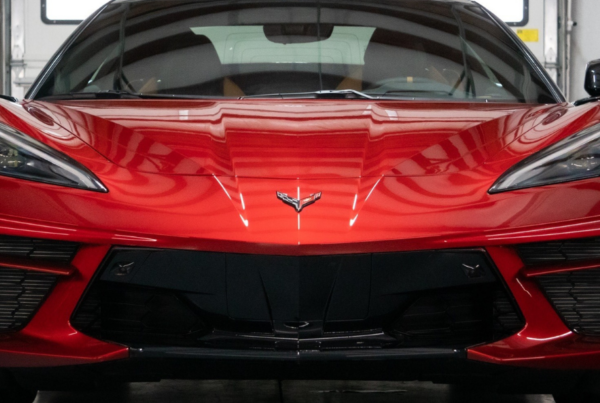 Get to Know LLumar®, Preferred PPF for the Corvette Museum