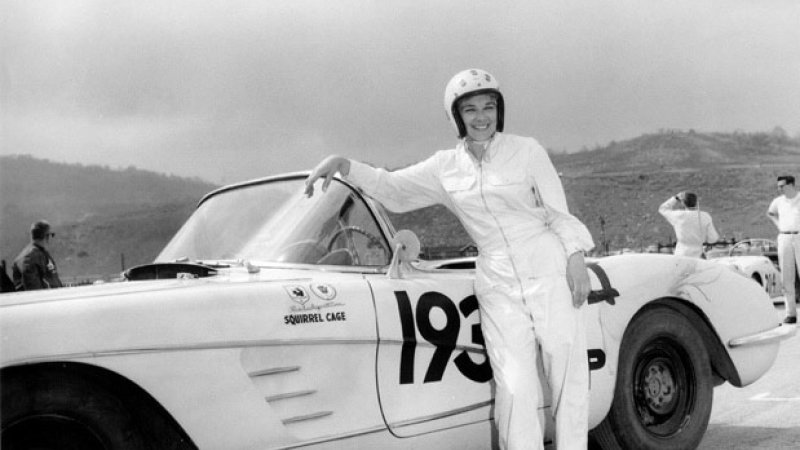 Affectionately known as “The Lady in Pink,” the late Donna Mae Mims became a true Corvette enthusiast from the first moment she spotted one, a 1957 Corvette, for sale on a dealership lot. At the time she and husband Mike had never heard of the model, but ended up purchasing a brand new one from Don Yenko Chevrolet. An invitation from a fellow motorist to a sports car meeting is what got Mims involved in SCCA, and in 1961 she started racing, winning the B Production national race that same year at Cumberland. While Mims liked her Corvette, she was not fond of the color. Her husband would not let her paint it pink, so she painted ‘Think Pink’ on its side. Her subsequent race cars bore the same name, while Mims sported pink coveralls, a pink crash helmet, and full pink wig behind the wheel. In her championship driving year, she was part of the Yenko/Chevrolet race team that dominated A/Production and B/Production SCCA racing with Corvettes, all while she was driving her little pink H/Production bug-eyed Sprite.

Her dedication to racing was not only recreational, but also professional, serving as Manager of Hi-Performance at Yenko Sports Cars. Her duties included helping other racers specify parts and even find sponsors, and her “company car” was a 1969 L88 Stingray. Mims freelanced as a writer for several car magazines, including Competition Press, Corvette News, SCCA’s Sports Car, and Sports Car Graphic magazines, among others. She participated with an all-female team in the 1972 Brock Yates Cannonball Sea-to-Shining-Sea Memorial Trophy Dash, driving a Cadillac. Adrienne Barbeau’s character in the Cannonball movie was based on Mims.

After retiring from racing in 1974, Mims stayed busy as a worker in Race Control at three Ohio race courses, and remained active in events of the Steel Cities SCCA Region, Corvette Club of Western Pennsylvania, Three Rivers Corvette Club (which she founded), Steeltown Corvette Club, and the Tri-Rivers Car Club Council. Sadly, Mims passed away on October 6, 2009 at the age of 82. Fittingly, her body was displayed in her pink 1979 Corvette during visitation at the funeral home, and a large group of forty plus Corvettes participated in the funeral procession.