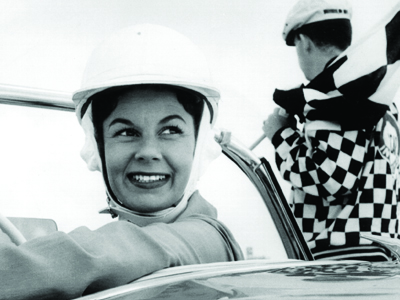 Betty Skelton (Frankman), frequently referred to as the “first lady of firsts”, worked side-by-side with some of the biggest names in Corvette, and established unbelievable records of her own in racing, aviation and automotive history. The first woman to be inducted in to the Corvette Hall of Fame was also the first woman in the world to drive racing cars to new records through the famous NASCAR measured mile on the sands of Daytona Beach. Skelton established records for Chevrolet behind the wheel of the Corvette, and appeared at major auto shows, as well as national ads and TV commercials.

Working as the first woman technical narrator for GM at major shows, Skelton attended and participated in many major races where Corvettes were showcased. She was on the committee that originated the “Corvette News” currently “Corvette Quarterly”, and worked as the agency’s editor for many years. Harley Earl at the GM Tech Center along with Bill Mitchell, designed a special Corvette for Betty in 1956-57. Skelton drove the translucent gold Corvette to Daytona for Speed Week and then paced all the NASCAR races with it in 1957. In 1959, she was invited by NASA to become the first woman to undergo physical and psychological testing for the first seven astronauts, and was directly involved with arranging America’s first astronauts to become Corvette Owners. Her list of accomplishments span from honors at many Hall of Fames and Museums throughout the United States, to the recipient of record breaking honors in world land speed, stock car endurance, and the stock car flying mile record. Betty Skelton was considered the Official Spokeswoman for Chevrolet.