The process of restoring a collector car is painstaking. From locating the parts you need, keeping it historically accurate, to that last finishing touch of a new paint job. Now imagine if the car you were helping bring to life was the brainchild of Harley Earl, and built from scratch by Corvette’s first Chief Engineer, Zora Arkus-Duntov. Such was the case for Dana Voelkel, President of Voelkel’s Collision Repair in Indianapolis, IN almost thirty years ago. Dana was seeing his work again for the first time in 20 years while visiting the National Corvette Museum’s special Indycar Exhibit.

The 1957 Corvette SS (XP-64) was Harley Earl’s brainchild except that he was going to drop a Chevrolet engine in a disguised Jaguar body, and race it at Sebring in 1957. When Duntov heard about the move and analyzed it from an engineering standpoint, he concluded it was not a good idea. His proposition? That styling design the race car, and he would build it from scratch!

The SS raced at the Sebring, Florida 12-Hours Endurance Race in March of 1957, but mechanical problems forced it out after 23 laps. The car did, however, serve to encourage Chevrolet General Manager Ed Cole and Duntov in the Corvette’s future as a performance car.

But what happened to the car after that race? According to former Chevrolet public relations director Ralph Kramer the car came back to Detroit after the Sebring race and was placed in the Design staff’s storage along with the so-called mule car (the mule is the car Bill Mitchell bought from GM for mere dollars, and turned it into a race car). Over the next dozen years, the SS appeared very infrequently for various events at the GM Tech Center.

“As it was (and still is) the charter of the financial people, unneeded properties periodically get identified and ordered removed from the books,” said Kramer. “Whichever department is holding the property is ordered to get rid of it and prove that it’s gone. If it’s a car, it likely would be crushed on site or sent out to be demolished. The SS was supposedly on the list through much of the ’60s.”

“With Zora’s blessing, and when they sensed the need, Gib Hufstader and others would relocate the car with the result that it would disappear from the inventory of one place and show up some place else. This game of cat and mouse goes on for years, and does make one wonder at how serious the bean counters really were,” joked Kramer.

“Regardless, Zora decided in 1970 to resolve the issue by having John DeLorean, Chevy’s new general manager, donate the car to the Indianapolis Motor Speedway. Zora and the Speedway owner, Tony Hulman, had been close friends since Zora tried to qualify for the 500 back in the ’40s. When I ran the Speedway’s museum, I went through the paperwork. I’m pretty sure Hulman had no interest in the car, but took it as a favor to Zora.”

According to Kramer, for the next 15 years the car stayed largely out of sight in the basement of the museum. “It needed a complete overhaul when we liberated it in 1985 to get it ready for Chevy’s 75th anniversary blow-out in Monterey.”

That’s when Bill Spoerle, restoration manager at Indianapolis Motor Speedway, was tasked with restoring the “Zora” SS. Automotive restoration was familiar territory to Spoerle. He studied mechanical engineering in trade school in his native Germany and graduated as a master tool and die craftsman. Spoerle could restore anything, and it seemed he did… Duesenbergs, Maseratis, a Lotus or three. He was meticulous and wanted everything perfect. So when it came time for the SS to get painted – he phoned family friend Dana Voelkel. 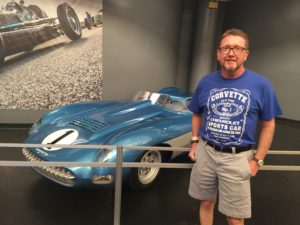 “It had to be done in glasurit,” said Voelkel. “You could not touch a buffer to it. No decals – the numbers had to be painted. You couldn’t nib and buff.” The task of painting the SS took Voelkel 3-4 weeks.

Voelkel was happy to see the car on display at the National Corvette Museum, and that his work was still holding up. The only noticeable difference was the presence of a Corvette lettering decal on the front. “You work on a car, and you may not see it again. We didn’t know this car was on display when we planned our trip, so it’s a nice surprise to see it.”

Over the years the Corvette SS has been displayed at the Indianapolis Motor Speedway from time to time, and was even on loan to the National Corvette Museum for the grand opening in 1994 – taking center stage on the glass turntable.