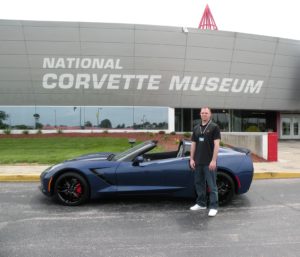 On Tuesday, May 31 the National Corvette Museum delivered their first 2016 Admiral Blue Corvette. The car was optioned with R8C Delivery by owner Scott Sloan of Battle Creek, Michigan. It was Scott’s second Museum Delivery, and his second Corvette. The first was a 2006 Lemans Blue Coupe.  “I really like the medium blue,” said Scott. “I sold the 2006 a couple of years ago and had decided back in December that I was going to buy a Stingray in February. But then they started releasing information that they were discontinuing the Laguna Blue so I decided to wait and see what blue would replace it.”

Scott had not seen the new Admiral Blue in person, only in pictures from its debut at the NCM Bash event. His car was ordered on April 25, 2016 from the factory through Criswell Chevrolet of Gaithersburg, Maryland – the third largest Corvette dealer in the country.

“Not every dealer was able to get allocations of the 2016 Admiral Blue, and there was only a two week ordering window for that color,” said Corvette Specialist Mike Furman. “We had a total of maybe seven Admiral Blue 2016s ordered through Criswell.”  Mike shared photos taken at the dealership of a C6 Lemans Blue by a C7 Admiral Blue. “There’s no metallic in the 1996 Admiral Blue but there is in the new one, so it’s actually very close to the 2004, 2005 and 2006 Lemans Blue Corvettes.”

Ordering for 2016 Corvettes is now complete and according to Chevrolet Corvette Product Marketing Manager Harlan Charles, they ended up with 221 Admiral Blue 2016 Stingrays, and 115 Z06s. “We are allowed up to three color changes per year, so Admiral Blue was our third color change for 2016. This then allowed us three more colors for the 2017 model year.” Harlan added that by offering the new color at the end of 2016 it helps stagger the new color introductions for the assembly plant work load.

“I’ve been doing this for 38 years and don’t remember GM allowing you to order a color coming out the following year,” said Mike. “It was pretty special I’d say.” Mike added that he enjoyed working with Scott on his order. Scott was a first time customer who found him on the forums. “He was very happy, thrilled to be getting a 2017 color in 2016. It was a great experience.”

The final 2016 Corvettes will roll off the line on June 24. The first full day of 2017 Corvette production will begin July 11. GM Corvette Plant’s summer shut down is June 27 – July 10 with tours resuming on July 11. Information and tickets for Public Plant tours can be found on our website at https://www.corvettemuseum.org/visit/plant-tours/. For the ultimate Corvette experience, check out all of our Delivery Department Programs, including VIP Tours and R8C Delivery online here https://www.corvettemuseum.org/visit/delivery-programs/. 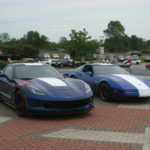 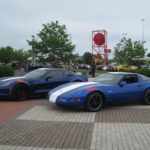 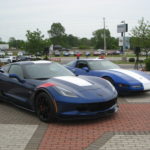 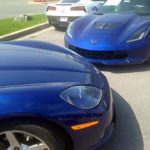 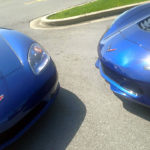 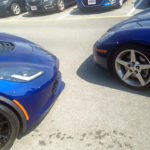