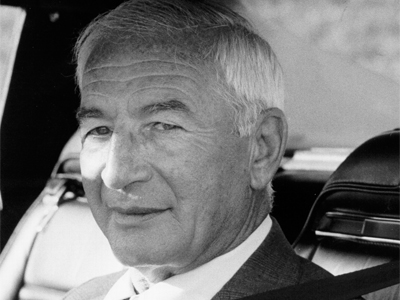 He was a risk taker, a daring race driver, a brilliant engineer, and an opportunist. Reckless, Resourceful, and Resilient. Zora Arkus-Duntov was all these things. Car enthusiasts know Duntov as the patron saint of the Corvette. But he was much more than that. He was a man who packed the experiences of nine or ten lifetimes into one-a man who defines the term “living on the edge.”

Zora Arkus-Duntov was born in Belgium, raised in Leningrad, and educated in Berlin. He hip hopped through wars and revolutions in Europe and along the way, married a dancer from the Follies Bergere. After World War II broke out, he joined the French Air Force and later arranged for the escape of his family from the Nazis. He then came to America to set up Ardun Mechanical, a war munitions company that eventually employed 300 people. In the post-war years, Zora shifted gears into the high performance arena, designing a cylinder head conversion for the Ford Flathead V8. It became the darling of hot-rodders everywhere.

After joining GM in 1953, Zora changed the Corvette from a turntable darling into one of the most respected sports cars in the world. It started slowly… a suspension tweak, some aerodynamic work, then the V8 high-performance camshaft, and fuel injection. Later would come independent rear suspension, pure-bred race cars and daring prototypes. Suddenly, “The General” was more alive than ever. Corvettes began to appear in racing paddocks at places like Pebble Beach and Sebring alongside Mercedes, Jaguars and Porsches. As the years passed, the Corvette would become the best selling sports car in the world and like, blue jeans and Marlboros, the Corvette would become known for its brash American character.

Duntov understood what an American sports car ought to be, despite the fact that his primary influences were European. His pedigree was drawn from some of the greatest names in motoring history-Ettori Bugatti, Luigi Chinetti, Dr. Ferry Porsche, Sydney Allard, and Carroll Shelby. Duntov, in fact, interacted with all of them and, as with these great men and their own marques, the Corvette, at least in its early years, became the product of Duntov’s singular vision, not of a committee or a focus group.

Zora was a renegade who believed in himself. He didn’t wait for things to happen, he made things happen-a throwback to a much more romantic, intuitive era. His fortunes took him like a young lad, leaping stone to stone across the raging river of history in the 20th Century. It was inevitable that Duntov, like thousands before him, would file through Ellis Island in search of a new life, a new opportunity in the United States. But Duntov didn’t just live the American dream, he helped to invent it by immortalizing one of the foremost expressions of fun and freedom, the Chevrolet Corvette. Upon Zora’s death in April of 1996, columnist George Will wrote, “If you do not mourn his passing, you are not a good American.”