What’s In Your Museum: Fuel Injection – Because Racecar

While the National Corvette Museum rotates display cars on a regular basis, we have recently shaken things up a bit in our Performance area, creating a special six car mini display featuring fuel injection Corvettes from the very early days of Corvette’s racing history.

1956
This Corvette was Sebring Car #7 and was used by Chevrolet during the summer of 1956 for various tests such as intake manifold block off plates. Bob McLean, head of experimental styling responsible for the first Corvette, the 1959 Racing Stingray, and many of the 1950s and 60s specials as well as Motororama cars, bought the 1956 Sebring Team Car #7 for personal use after Max Goldman campaigned the car at Cumberland, Elkhart Lake and the Haven Hill Climb. McLean reconfigured the car as a SR-2. The modifications included extended SR-2 nose, louvered hood, early SR-2 seats, special dash with Sterward Warner rally gauges, special trim on doors and door sills, special parking lamps, special headlamp rims and 1958 style tail lamps.

1957
One of two 1957 Corvettes built to race at Nassau, Daytona, Sebring and Le Mans starting in late 1956. The first race date was in December for the Nassau Trophy and Governor’s Trophy races, and getting the production-based 1957s ready in time would mean a major time crunch. Chevrolet General Manager, Ed Cole, gave the green light in October for the two production racers, which were built the following month and race-prepped by the Corvette engineering team (including Zora Duntov and John Fitch). The two cars were the first Corvettes built with Rochester fuel injection and four-speed manual transmission, items that were on track to join Corvette’s option list before the 24 Hours of Le Mans the following June.

At Nassau, Dick Thompson drove one car to a class win (and 7th overall) in the 20-lap Governor’s Trophy race. Jim Jeffords was close behind, finishing second in class and ninth overall. The good luck continued in early 1957 where Paul Goldsmith drove one car to Production class wins in the Standing Start Mile and Flying Mile. Next up was Sebring, where the two production-based 1957s were joined by the Corvette SR-2 and the just finished XP-64 Corvette SS. The #3 and #4 ran 1-2 in the GT 5000 class, while the SR-1 won the Sports 5000 class. Unfortunately the Corvette SS lasted only 23 laps before brake problems and a broken rear suspension sidelined it.

1957 Zora SS
The Corvette SS was built in the spring of 1957 with the intention of participating in international sports car racing. The SS involved many of Chevrolet’s legendary engineering staff including Ed Cole, Harley Earl, Zora Arkus -Duntov, Bill Mitchell and Harry Barr among others.

The 283-C.I. V-8 powered SS drew considerable attention and was to have been driven at the Sebring, Florida 12-Hours Endurance Race in March by the Argentinian ace Juan Manuel Fangio and Britain’s Stirling Moss, but both were released when the car was not completed in time for testing. It was shared instead by the Italian Piero Taruffi and the American John Fitch, who was team manager for Corvette’s production car racing team. Starting the race with virtually no practice, a variety of handling and braking problems beset Fitch and Taruffi from the outset and the SS had to be withdrawn due to overheating after only 23 laps.

The potential was there and enthusiastic plans were being made for the 24 Hours of LeMans. Unfortunately, its only appearance in a major event came at Sebring due to a decision by the executives of the Automobile Manufacturers Association to disassociate themselves from directly participating in motorsports. The SS was relegated to test track duty.

1957
This Corvette is the earliest known RPO 684 Corvette produced at St. Louis Assembly. It was built May 14, 1957 and factory delivered to driver Bark Henry, then driven to Cumberland to race May 17-19. Sponsor Robert “Bob” Rosenthal of Rosenthal Chevrolet in Arlington, VA was the most successful dealer race team that year. The car was heavily promoted by Ed Cole, and supported by Zora Duntov and Chevrolet. It is believed to be the most successful 1957 Corvette in SCCA racing during the 1957 season.

1963 Z06
One of the first six Z06s built and taken to GM Tech, dismantled, and reassembled by hand. Two Z06s were delivered to Grady Davis, President and CEO of Gulf Oil; two to Mickey Thompson; and two were delivered to Roger Penske. This car has been raced competitively in the United States as well as Europe, including the famous Nurburgring in Germany and the Zolder in Belgium.

1963 Z06 Stingray
The first ever Z06 Stingray and the first batch of six racecars offered to top-ranking Corvette drivers. This car was picked up at the St. Louis factory by Dave MacDonald and his wife Sherry in early October, 1962. The pair drove the car back to California to accrue the break-in miles. It was race-prepped by MacDonald and Bill Thomas for the October 13, 1962 debut outing at Riverside Raceway – a highly anticipated showdown between America’s two most iconic sports cars – the new Chevrolet Stingray and Carroll Shelby’s Ford Cobra. MacDonald and Cobra driver Bill Krause put on a wild show in the first hour of the race, exchanging the lead several times as they pulled far away from the rest of the field. Both cars, however, bowed out with rear end failures. 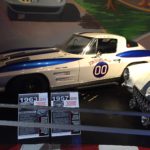 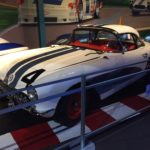 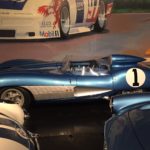 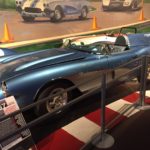 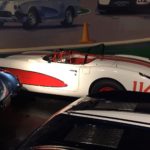 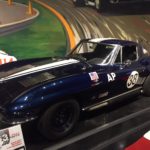 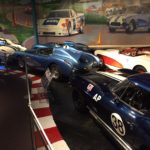