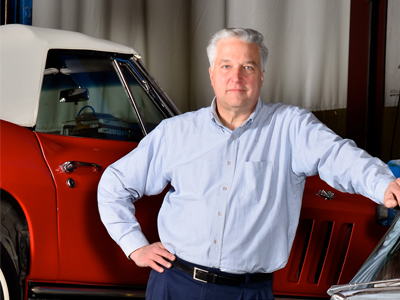 Werner Meier’s very first car was a new Corvette. His love for the car would eventually guide the direction of his life taking him from his family’s garage where he would work on cars with his friends, to one day starting Masterworks Automotive Services. Now regarded as one of the best in the world at restoration, Werner has worked on over 100 Corvettes, including cars built for Harley Earl, Bill Mitchell and others. Cars from his collection have been put on display at the National Corvette Museum, the Gilmore Car Museum, the Lingenfelter Collection and even the GM Heritage Center. His work and dedication to the hobby have earned him a place in the Inaugural Bloomington Gold Corvette Hall of Fame.

As committed to the future of Corvette as he is to its past, Werner’s efforts through car shows and with the Boy Scouts of America have inspired future generations to make their first car a Corvette too. For his devotion, passion, and dedication to the Corvette lifestyle, we welcome Werner Meier into the Corvette Hall of Fame.