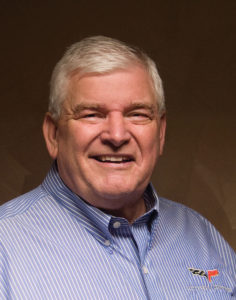 Just for a moment, imagine your life without the National Corvette Museum. What if there was never a Bash event for you to go to or an Anniversary event to be a part of? What if there was no Corvette Caravan, no Museum in Motion events, no Corvette Museum Deliveries and no eNews from us in your in box once a week? What if there was no track, no library and archives or exhibit space to connect our history to the next generation of enthusiasts? What friends did you meet here that you might not have ever known? What memories would you have never made? What would you be reading now, instead of this?

Wendell would object to being singled out and rightly give credit to the “the good Lord” and the team around him. In truth this was an effort that required a motivated team, dedicated volunteers and the generous support of members. However, it also needed a leader who could motivate the team and inspire dedication in others, while giving members a cause that they felt good about supporting.

So how does a man who isn’t really a car guy; and who never even dreamed of owning a Corvette someday become inducted into the Corvette Hall of Fame?

Wendell was the 12th of 13 children, all born at home. His father was a Baptist minister and a tenant farmer until he was able to get an FHA loan to buy his first farm. “With nine boys and four girls,” Wendell chuckles, “he had a pretty good labor supply.”

Wendell learned the value of teamwork and saw firsthand the way it could turn a neglected farm into something of value again. This was a lesson that would be important for the life that was ahead of him.

When he was only four years old, his mother passed, and his sister Hellen took on the responsibilities of caring for the family. She was only 13 years old at the time. Wendell still refers to her as his sister/mother. She taught him about the value of leadership in the midst of great adversity.

After graduating from High School, Wendell went to Western Kentucky University to study agriculture, but he struggled with the demands of being a college student. “I don’t think I was ready for it. I never studied in high school because there wasn’t time for it. We had our work to do on the farm after school. Sometimes we didn’t even get to milk the cows until after dark.” Wendell withdrew from WKU to reevaluate his life, and to help care for a brother who had a brain tumor. Later, he decided to pursue his dream of being a sports broadcaster. Growing up he wasn’t able to compete in sports as the chores on the farm got in the way of that, but he loved sports none-the-less, and wanted to be a part of it somehow.

He found a vocational school that taught broadcasting and enrolled there. That’s where he met Jan, the woman who he would one day marry. She was studying to become a dental assistant. They began dating and talking about a future together.

It was about that time that the U.S. Army revealed that they had a different plan for Wendell. Two days after graduating he was sworn into the Army and was later deployed to Vietnam where he served in a Combat Infantry Company. He would eventually come home with a Purple Heart and late onset PTSD along with a heart for his fellow veterans, whom he would feel compelled to serve through his entire life.

When he returned home in 1970, he was ready to go to school and resumed his studies at WKU. Now married to Jan and with a baby on the way, he looked for part-time work and found it at a local bank. “I didn’t have experience with banking at the time, but I knew it was a people business, and that appealed to me.”

Wendell did well, to the point where the bank wanted him to work full-time. They agreed to pay for books and tuition if he would become a part time student. It took twice as long to get his degree that way, but he had found a profession that he loved. “The Lord blessed me and after 23 years I took the job as President of a bank.”

Along the way to that position, Wendell learned that Bowling Green was being considered as a possible site for a National Corvette Museum. With the Corvette Assembly Plant already a part of the community, Wendell saw early on how this could turn into something big for the area. He became a part of the Chamber of Commerce Task Force, charged with putting together an incentive package that would make Bowling Green an attractive location. He presented that package at the NCRS Southeast Regional Meet in Florida in January 1990. While there, he saw something that astounded him. The Corvette community was, in fact, one big family. He realized then that they were more than just car nuts, race fans and people who loved Corvettes, this was a family looking to build a home.

With this new mindset, Wendell worked with local officials to pull together the financing package used to fund the construction of the Museum. To bolster the case, he helped to get the land donated for the project, ideally located near the Plant and next to I-65. Work began, and on September 2, 1994 the doors of the National Corvette Museum were opened to the public.

The reception was beyond anything anyone could have ever imagined. The freeway was locked up with Corvettes for miles and people lined up for hours just to get through the front door. The Corvette Store stayed open around the clock to serve everyone who showed up.

Then something equally unexpected happened. Over time the interest in the Museum waned and dropped off to a point where the future was in jeopardy. The people in charge at the time had never run a Museum before and didn’t know how to do it properly. It quickly became apparent that unless someone could come in and fix what was wrong, this gleaming moment in Corvette history would become a sad footnote. The banks actually wrote a foreclosure letter demanding changes, including new leadership at the top.

It turned out that the Corvette Museum didn’t need a “car guy” to survive, it needed a businessman–someone who knew how to run the Museum as a business, while also appreciating that this was a business that belonged to a family. Wendell was offered the position and accepted the challenge. His first day was December 20, 1996.

Turning things around became a much bigger effort than Wendell had envisioned. Just days into the job, he and CFO Christy Thomas were summoned to Detroit to present a budget and business plan that they didn’t even have yet. They worked through New Year’s Day to put together a presentation only to find out that they were not going to get financial help after all. So, Wendell inquired about other means of support from Chevrolet. He was able to secure a Corvette to raffle and get Dale Earnhardt to do a promotional event. They also agreed to allow product into the Corvette store without the markups and royalties. “In all Christy and I submitted 28 suggestions for ways Chevrolet could help us without writing a check, and they approved 22 of them. This was the start we could build on.”

Wendell focused on cultivating a family atmosphere that made guests feel like this was their Museum. Corvette team members made it the place to connect with Corvette fans about new cars, while playfully fending off questions about future product. Over time the loans were paid back, and the Museum grew in membership from 1,631 to over 36,000 strong, with the number of visitors reaching nearly 250,000 a year. In 2009, the Museum doubled in size, allowing for bigger events and facility rentals to make it a resource to the community. In 2014, the NCM Motorsports Park was opened, providing a world-class facility for driving, testing, learning, competing, training and having fun. The NCM Kartplex has been added since, and an off-road course is being developed. That may sound like sales copy from a brochure, but to Wendell Strode, it sounds like a mission accomplished.

“Our goal was to make this the gateway to all things Corvette–a place where Corvette owners felt that same sense of family that I felt when I first went to that NCRS event. We also wanted it to be an institution that GM would be proud to be associated with. The fact that this Museum is here in the first place is a testament to the love and devotion that this car inspires. It’s our duty to take care of it, and I’m proud of our staff, our volunteers and our supporters for helping us get to this point.”

Over the years there were many challenges and even one natural disaster to overcome, but Wendell faced it all with a level head, grounded in faith. Now retired, he is humble and maybe a little uncomfortable about being inducted into the Corvette Hall of Fame. “I’m grateful and honored, but this isn’t about something Wendell did,” he says while pointing to himself. “This is about what a family can do when they believe in something enough to work hard for it. I’m just glad that the good Lord helped me to be involved in all of this. It has been a blessing.”