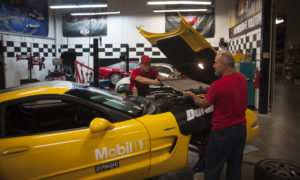 Since 1953 the Corvette has been America’s Sports Car. The National Corvette Museum was established as a 501(c)3 not-for-profit foundation with a mission of celebrating the invention of the Corvette; preserving its past, present and future; and educating the public about Corvette. This spring a new section opened in the Museum that further accomplishes this mission.

In recent years, thanks to vehicle donations from Corvette enthusiasts, the number of cars in the Museum’s collection has steadily grown. In addition, the NCM Motorsports Park utilizes a number of the donated Corvettes (mostly Z06s) to provide hot lap rides, and lead touring laps at the track. With the increase in Corvettes and use of them, a need surfaced to have an internal department that would maintain and preserve the cars.

The opening of the new Vehicle Maintenance and Preservation Department has allowed the Museum to perform work on cars that was previously outsourced. Spearheading the efforts is Daniel Decker, a former manager of the local Midas shop who is also ASE certified in steering, suspension and brakes. Daniel is especially excited about the retrofitted space, sharing that it is now more like a modern shop with many new amenities. Included is a Titan lift, fire-proof cabinets, a tool box donated by Snap-On Tools, up-to-date scanner, electrical and air ceiling drops, updated tools, an engine hoist, motor stand and thanks to Coats – a tire changer and balancer.

“Everything is more conveniently located and it helps with the flow of getting cars in, worked – on, and back out,” shared Daniel.  “We’re able to do the basic maintenance things like oil changes and tire rotation as well as take care of more complex issues that arise.” 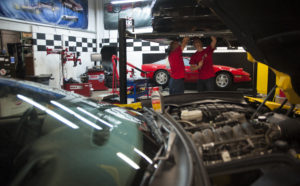 Daniel said that he’s had the opportunity to do a few ‘fun’ projects like pulling the transmission out of the Museum’s 2002 Z06 donated by Ivan and Mary Schrodt to reseal it, rebuilding the carburetor on the 1954 Corvette (donated by Lori Hale, in memory of her late husband Morey); repairing the compressor on the 50th Anniversary Corvette donated by Craig and Sharon Conde; and fixing the internal broken axle shafts in the rear differential on the 1972 Corvette race car donated by Richard and Holly Anderson.

Most of Daniel’s handiwork can be witnessed through a new glass garage door, installed so that Museum visitors can catch a glimpse behind the scenes. And in some instances Daniel will raise the door and invite them in for a closer look.

In May, Daniel hosted a two-hour seminar on a Saturday called “ME-chanics” – teaching car care basics to 31 registered participants, 19 of which were boy scouts from Columbus, Ohio. The “ME-chanics” program is offered twice each year (as well as on demand for groups of 20 or more) and is $10 per person (includes Museum admission).

As a member of the NCRS since 1975, and a Lifetime Founding Member of the Museum (just to name two distinctions), George E. Dupont has a great passion for preserving the past of America’s sports car. As evidence of that he has a 1966 Corvette that he’s owned for nearly 50 years.

George shares, “Long before there was a Maintenance and Preservation Department at the Museum, I’ve been making automatic monthly donations toward that goal, hoping to inspire others to do the same. Taking care of these cars properly in a dedicated area with the right equipment and experienced staff is one of the most important things the NCM can do in their mission to preserve the past of Corvette.  For a minimum of $25, up to whatever you can afford, you can set this up for monthly payments and start taking an active role in making sure these cars are there for future generations.”

We are grateful to the supporters who made contributions to help the Museum get the Maintenance and Preservation area started, as well as those who have donated their Corvettes and even provided funding for their cars’ on-going care. Taking care of these precious collector cars and maintaining and preserving their condition is a mission that the Museum and all Corvette enthusiasts can be proud to be a part of. To set up your support of the Vehicle Maintenance and Preservation Department contact Connie Russell at 270-467-8815 or [email protected]