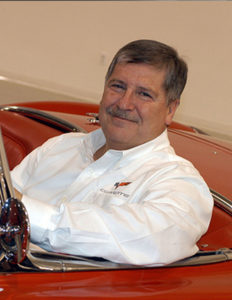 In Corvette’s history, there have been a few engineers who were also real race car drivers, but only two of them have been Corvette Chief Engineers—the legendary Zora Arkus-Duntov, and Tom Wallace.

Tom has always been a car guy, going back to high-school when he had the fastest car around, and quickly gained a reputation for being the one to beat in a drag race. As he got older and developed his skill as a driver, he would go on to drive professionally competing in the 24 Hours of Daytona, 12 Hours of Sebring and the Talladega 6-Hour race.

Along the way, armed with a Mechanical Engineering degree from Kettering University, he took his passion and knowledge of performance and applied it to a career at General Motors. He would go on to become Vehicle Line Executive for Performance cars presiding as the Chief Engineer from 2005 to 2008 for the Corvette.
As a team builder, Tom brought everyone closer together–not just from engineering and design areas, but also manufacturing and marketing. Early on he saw the value of bringing a racer’s mentality to the Corvette program, so he invited his team to go out to the track for Corvette Museum High Performance Driving Events to learn more about what Corvette could do, and to dream of what it could do someday.

Then, during a dark time in automotive history, when the future of GM was in question, Tom surprised the world and pulled together the resources to lead a team on a mission to create the fastest, most balanced, most capable Corvette ever made to that point. It was the 2009 638 hp, 200+ mph ZR1 Corvette.

While retired now, the influence of Tom Wallace continues to this day as ten years later, the new highest-performance standard in Corvette evolution is called ZR1 as well.