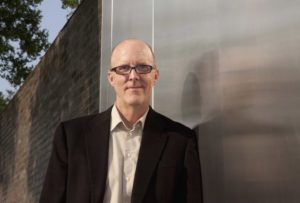 When Tom Peters speaks about his job, it doesn’t take long to understand why he became the Director of Design for the GM Performance Car Studio. He talks about the artistry, form, and function of design as if it were some kind of automotive alchemy–a magic thing that he understands fully but is still in complete awe of. When describing the way shapes and surfaces react to the elements, his hands sculpt the air to conjure up images, making it almost possible to see what he is seeing. Truth be told, for many years he has been making ideas materialize out of thin air into some of the most dynamic, aggressively refined performance machines in automotive history.

Tom’s journey to the inner sanctum of the Design Studio began as a child. He remembers feeling compelled to draw everything that caught his attention. Over the years his sketchbooks filled up with drawings of people, plants, animals, and houses, but most often he drew aircraft and automobiles. He was fascinated by the way that lines and surfaces could have a kind of beauty to them while also performing some type of function.

Then, while still in grade school, Tom saw something that would stay with him forever. “I remember getting off the bus with my friends and seeing what looked like a silver flying-saucer-spaceship coming in for a landing. It was a 1963 Stingray Corvette. The door opened, and it was the local rich kid. We just stopped in our tracks and stared at this amazing car as his dad drove off. Often, we waited outside for the chance to see it again.”

Inspired by that experience, Tom continued to refine his drawings, snapping up car magazines to see what was coming up next. “It was the late 1960s and muscle cars had come into their own, and the Stingray was the king.”

One of his biggest artistic influences at that time was Ed “Big Daddy” Roth. “Kids who love cars back then loved hot rod magazines. There were always these two-page ads in them selling t-shirts with Ed Roth cartoon monsters on them. These characters were driving these cars, mostly Chevys and Fords, with blown engines coming out of the hoods and giant slicks with fire and smoke coming off of them. I was just enamored by these artistically. While they were cartoons and distorted, the cars were correct in their detail, line and proportion, and I was attracted to that. I remember doing my own drawings and selling them to my classmates for a quarter each.”

By the time Tom got to college, he was not only drawing cars, but working on them as well–learning how the mechanics merged with the aesthetics of an automobile to give them character and purpose. Even at this point however, he was unaware that there was something called industrial design, so for two years he went to school as an advertising/illustration major.

Then one day, when he was in the color lab, he spotted a catalog that another student had brought to class. Tom asked to look at it and at that moment his life changed forever. “It was an Art Center catalog. Here was a catalog full of pictures of wonderful cars and product design, all the things I’d been interested in drawing. I couldn’t believe there was actually a school for this.”

What sealed it for Tom was when he noticed that one of the professors listed was Harry Bradley. “He was another artist I looked up to growing up. He drew for the automotive magazines, mostly doing drawings of what future cars might look like, including the Corvette. I used to cut out his drawings and put them in a binder for reference material. So right then and there, I had an epiphany. I knew I had to go to this school.”

Tom created a portfolio and submitted it. They accepted him, so he packed up his ’68 Galaxy and went after his dream.

While Art Center proved to be everything Tom had dreamed it would be, money got tight after that first year. He was down to only enough funds for another semester when he noticed GM was offering a paid internship for Juniors or Seniors. Even though Tom was a Sophomore at the time, he was desperate enough to submit a portfolio anyway. “I couldn’t believe it when I won. That opportunity saved my life in more ways than one. Without that I don’t know what I’d be doing today.”

Tom describes the experience of working in the Design studio as an intern like going to heaven. Working with actual designers in the real world doing real work gave him insight and experience that took his own work to the next level. During that time, he was able to build a portfolio which earned him a scholarship to finish school.

His talent also got him noticed by Chuck Jordan, who was at that time, VP of Design for GM. When Tom graduated, Chuck was waiting with an offer. In 1980, Tom began working in the Advance Design Studio.

Early on, he began to understand that in addition to drawing ability, it was critical to understanding sculpting. “I had the honor to work with some incredible sculptors. It is amazing how you can hand them a drawing and they can turn it into a thing you can touch. They don’t get enough credit. They made me rethink of my 2D drawings in 3D terms–to imagine ahead what each line is going to do in the real world. With Corvette being as sculptural as it is, and how functional it must be, this becomes a very serious form of sculpture.”

When he was at Art Center, Tom had fallen for a girl who was hoping for a job with GM too. When that didn’t happen, it forced Tom to look at his priorities. “Six months into my dream job, she got an offer with Texas Instruments in Lubbock Texas. I wanted to get married, and so I followed my heart and left GM. After all that work and all that dreaming, it was hard to go into Chuck’s office and give him the news, but I told him that if he ever had two openings, we’d be back in a heartbeat.”

Tom submitted a portfolio to Texas Instruments and was hired.  After two years of designing everything from military applications to calculators, a letter came in the mail from Chuck Jordan offering Tom and his wife a job. “I enjoyed what I was doing at TI, but I am a car guy. I’ve got gas in my veins. I was ready to go and so was she, so we were off to Detroit.”

Tom worked on many projects but was always happiest working on Corvette. “I could feel the electricity in a studio led by Jerry Palmer. One of the first assignments he gave me was to work on a Corvette mid-engine concept using the Lotus Indy engine. When we were done I looked at it and remembered the 1963 Stingray spaceship I saw as a kid way back when, and here I am in this exclusive, hallowed area working on this vehicle.”

Tom eventually became a Chief in his own advance studio and remembers a friendly competition set up by Jordan, challenging three studios to design their own versions of the next generation Corvette. “We developed a red one, John Cafaro’s team developed a black one, and the studio in California actually did a running version that had a V6 in it. We brought them out to an air force base with F-16s in the background. Chuck Jordan came to see them, and in the end, John got the job for C5.” Tom was happy for John as he didn’t see it as a competition as much as an exercise to flesh out ideas that might all influence the future Corvette.

This teamwork-based attitude, and love for the process eventually led to Tom being named the Chief of Design for the C6 Corvette and the C7 Stingray. Ed Welburn, who was the head of Global Design by that time, has fond memories of those days. “As we were developing the C7 Corvette,” Ed shares, “Tom and his team really wanted to call it a Stingray. They wanted it bad. We had done a Stingray concept that was eventually used in the Transformers movie, but I kept telling them that the production designs didn’t look like a Stingray yet.  There have been great Corvettes over the years that I love and that I own, but not all of them are Stingrays.”

Tom’s team kept pushing until finally Ed began to see it take shape. “It became edgy and lean. The look was very fluid, and the form development was just spectacular. I’ll never forget the day when I finally said to Tom and his gang, that I thought we had a Stingray here. That was a big moment.”

Now retired, Tom looks back on moments like that with a smile. “The whole process was very exciting. It started when I was young, and it was a passion that has carried me through my whole life. Throughout my career, I was always as excited about going to the studio as I was when I was first hired in.”

Tom is especially proud of being a part of the Corvette team. “The new Corvette is the culmination of all that it has ever been, refined by all we’ve learned and imagined through its development. If we all do it correctly, and the aesthetic of the vehicle serves the function of it in a way that is elegantly executed, something magic really does happen. It becomes timeless.”