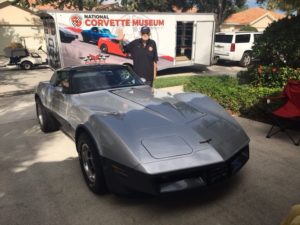 Thomas Myers Donating his 1981 Corvette to the Museum.

Thomas Myers was just a young boy when he saw his first Corvette, but made a promise to himself that he would own one someday. “Every time he saw a Corvette, he always waved,” said Marilyn Britt, Tom’s companion of nine years.

But it wasn’t until 1981 that he purchased his very first Corvette – a brand new 1981 two-tone Silver and Charcoal Coupe… one of the first off the lines at the new GM Bowling Green Assembly Plant. “That’s why it was so important to him… and it’s a two tone. They only made a few of those,” said Marilyn. “He kept buying and selling Corvettes, but he always kept the 1981 in mint condition – it was his Bowling Green special.”

Tom owned four Corvettes when he and Marilyn met, but he had owned more than 20 over the years. “He loved Corvettes and was absolutely obsessed with the 1981. That was his baby and he loved it.”

Marilyn fondly recalled the first time she went with Tom to a car show. “It was the year we started dating and we went down to Islamorada, FL for the show. It was my first car show, but I’ve been to a million with Tom since. He won a trophy. Tom’s leg started hurting so I had to drive the car home. I was real nervous!”

Tom was a true enthusiast, having been a member of the Corvette Club of Palm Beaches, and Gold Coast Corvette Club. Originally from Wallingford, CT, Tom had a heated garage and driveway to keep his collection nice and cozy during the cold winter months up north. And when he moved to Florida in the early 2000s, his garage was air conditioned. “He was a true lover of Corvettes and treated them like they were his children,” added Marilyn.

Being an enthusiast, Tom was quite familiar with the National Corvette Museum, taking delivery of his 2002 Millennium Yellow Corvette through the R8C Museum Delivery Program and having visited several times with his Corvette club. “He was really into it,” said Marilyn.

“Gary Cockriel [from the Museum] came to one of our club meetings and told us about donating a car. Tom went over after the meeting and talked to Gary and said ‘yes – I want to donate my 1981.’ But he didn’t know when. He was going to leave it in his will, then he got cancer right after that. He thought he’d fight it, but it didn’t work,” said Marilyn. “He gave it a good shot.”

In December, 2016 Gary visited Tom and Marilyn – this time so Tom could donate his prized 1981 to the Museum. “He was very sick, very weak, but he was able to drive the car one last time and back it up the ramp of the trailer, which was fabulous. He was in the driveway and watched it get loaded. When it drove away, he had a tear in his eye, and he looked at me and said ‘they’re going to look after my baby.’ That was very important to him, that somebody was going to keep it in pristine shape,” said Marilyn.

As for Marilyn, she will keep Corvetteing in Tom’s 2011 Supersonic Blue Grand Sport. “I don’t drive it that often, I’m a little nervous of it. It’s a powerful car. But I love it, it’s beautiful.” 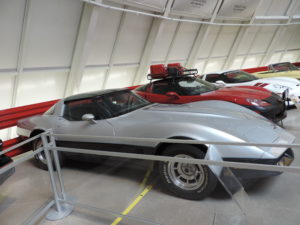 The 1981 “Bowling Green Special” Donated by Thomas Myers, on display in the Museum’s Skydome.

Visitors to the Museum can join us in celebrating Tom’s life through his donation as the 1981 is currently on display in the Skydome. If you have a Corvette and you’d like to discuss its future – we’d love to hear from you. Please contact Connie Russell at 270-467-8815 or email [email protected]. The Museum is a 501c3 nonprofit foundation and donations are tax deductible.