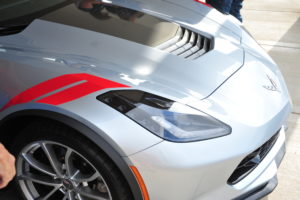 Rumors have been circulating online that the new Sterling Blue Metallic, which debuted at the Michelin NCM Bash April, 2016 for the 2017 Model Year, will be phased out in early 2017. That rumor was confirmed to be true by Chevrolet Corvette Product Manager Harlan Charles.

The last date to order the shade is February 16, 2017, and the anticipated last build week is March 20, 2017. We asked Harlan if he had any other details to share, including what the replacement will be, but in true General Motors fashion he dodged our pressing for more information. “Let everyone know to come to the Bash to see the new stuff for 2018,” Harlan said.

The Michelin NCM Bash is slated for April 27-29 and registration will be opening soon. The Bash is held annually the last weekend of April at the National Corvette Museum in Bowling Green, KY and features the roll-out of the next model year Corvettes with presentations by Chevrolet Engineers and Designers, reviewing the current model year’s stats, and information on what to expect for the next model. The team also bring a number of new models down for display, giving event attendees the opportunity to try them on for size and get an up-close look at the new options, features and colors. The event also provides an opportunity for enthusiasts to share their feedback and suggestions to those responsible for creating the iconic American sports car, as well as questions… some of which are also dodged!

We hope to see you next spring where we can all learn more about what’s coming down the pipeline.