Stars and Cars Exhibit Now Featured in the Skydome

The National Corvette Museum is proud to present the new Stars and Cars exhibit now on display in the Skydome. The featured cars include George Jones’ 1978 Corvette and Roy Orbison’s 1967 Corvette Stingray. Along with their shared love for music, Jones and Orbison loved their Corvettes. The Museum is proud to honor the legacy of these two amazing musicians. In the words of Director of Collections/Curator, Derek Moore, these Corvettes “help us talk about the cross-cultural impact that the Corvette has. It is an affordable car that the masses can purchase, but it is also a car that celebrities own, love and drive.”

Country music singer George Jones special-ordered his 1978 two-tone Corvette to feature a one-off paint scheme of Corvette Dark Brown and Corvette Light Beige. Jones chose the two-tone paint because he was fond of the 1978 Corvette Pace Car’s two tone job. The iconic front license plate remains to this day, showcasing his nickname, “Possum”. A musical genius, he had more than 160 chart singles throughout his career. At the National Corvette Museum’s Grand Opening celebration in 1994, Jones performed his best-known hit, “He Stopped Loving Her Today”. George’s love of Corvette also inspired his song, “The One I Loved Back Then (The Corvette Song)”. George Jones’ car is the first celebrity-owned Corvette now permanently displayed the National Corvette Museum.

Also on display, is a red 1967 Stingray once belonging to musician and six-time Grammy winner, Roy Orbison. With close to two dozen Billboard Top 40 hit singles including, “Only the Lonely”, “Crying”, and “Pretty Woman”, Roy Orbison’s talent and success in the music industry would earn him a spot in the Rock and Roll Hall of Fame. Throughout his life, Orbison owned many Corvettes, but the red ’67 Stingray was his personal daily driver. He would commute to the studio to record albums such as The Traveling Wilburys and Mystery Girl. The car’s features include factory side pipes, air conditioning, chrome step plates, 4-speed manual transmission, electric windows, and power steering. This 1967 Stingray was the last Corvette purchased by Roy before his passing in 1988. 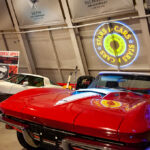 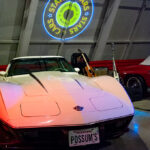 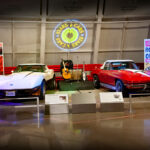