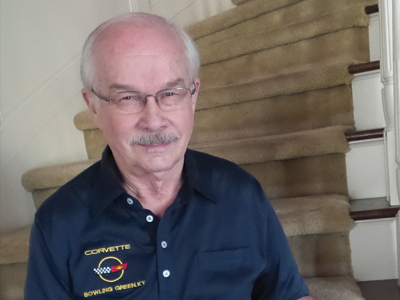 Russ McLean had a reputation at GM for turning around operations where quality and/or cost was an issue. So in the 1990s, when the Corvette program was in trouble, he was brought in to turn it around. While he was able to achieve his goal of decreasing cost and improving quality, a change in power at GM resulted in a radical change of instructions to Russ, who was told to “let the Corvette die.”

At this point Russ was confronted with a dilemma. While he was a company guy who built his career on his solid work ethic, he decided that he couldn’t let the Corvette fail.
Risking his job and reputation, he joined forces with other rebels within the company to continue working “in the shadows” to keep the Corvette program going and moving forward into the next generation.

“I was still doing my job, just not following instructions,” he says laughing.

Of course, the success of the 5th generation Corvette validated their activities and propelled Corvette to even greater heights since. Being inducted into the Corvette Hall of Fame is just one more confirmation that he had done the right thing.

“This honor is really for the Corvette people working with me who did their jobs extremely well; who interphased and cooperated with each other; who were so dedicated and supportive of each other. My job was to let the Corvette die, but together we did all we could do to improve the C4 and keep the C5 viable. I’m very happy to be representing all of those people in the Corvette Hall of Fame.”