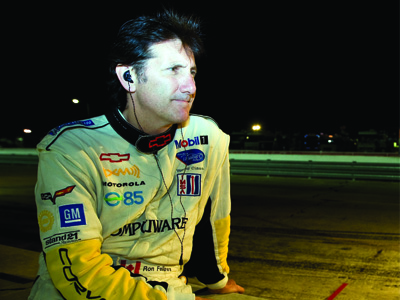 Ron Fellows’ impressive skill as a driver for the Corvette Racing Team has earned him the respect of Corvette fans everywhere. His 27 wins, three ALMS championships and two wins at the 24 Hours of Le Mans, along with his unprecedented four consecutive “Most Popular Driver” awards from ALMS fans, testify to his track record of success. Although he has not raced for the factory team since 2008, he remains one of the most recognizable, respected and popular personalities to ever represent Corvette’s racing heritage. As evidence of his enormous popularity, GM paid tribute to Ron by creating the “Ron Fellows ALMS GT1 Champion Corvette Z06” in 2007.

While he still races in NASCAR events and is tied with Terry Labonte for the most road course wins in NASCAR history, Ron has served as an advisor for the GM/Pratt & Miller factory team and an ambassador for Corvette in general, showing up at races, Corvette Corrals, Corvette functions and charities, often auctioning off passes to the Ron Fellows Driving School for worthwhile causes.