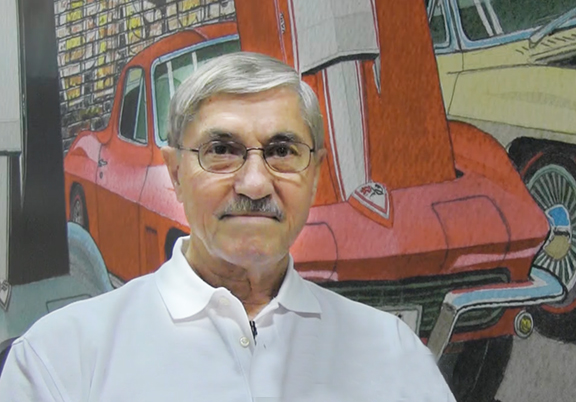 Ralph Kramer was one of the first Chevrolet executives to bolster GM support for the Corvette Museum in its founding years. He helped the museum gain stature with the management of Chevrolet-Pontiac-Canada Division, providing several major contacts which were developed and established, opening doors and helping to preserve history. Through Kramer’s contacts and influence, many individuals both inside and outside GM became aware of the Museum’s mission, and many current Corvette Hall of Fame inductees were introduced to the museum by Kramer. He found ways to create Chevrolet media events that got the Museum noticed around the world. Although its official independence from GM was a constant, Kramer’s quiet work with Chevrolet General Manager Jim Perkins on behalf of the Museum saw it survive and grow.  Had it not been for Kramer, the one-millionth Corvette likely wouldn’t be a museum display piece today. He served on the NCM Board of Directors from 1990 to 1998.

Kramer was a reporter for The Indianapolis News before joining GM in 1973. During his tenure in Chevrolet public relations, he managed Chevy’ pace car and race engine presence at the Indianapolis Motor Speedway. He left GM in 1995 to become the Speedway’s public affairs director and director of the Hall of Fame Museum.  In 1998, he formed TheKramerCo., a PR and marketing firm. He helped found the “Corvette Enthusiast” magazine, where he was a columnist. Since then, he has authored two books about the Speedway, “100 Years of Racing” and “A Century of Excitement.”  He and Jerry Burton, a 2014 Hall of Fame inductee, co-wrote the widely acclaimed “100 Years of Chevrolet” book for Automobile Quarterly.

“Though I left GM in 1995, I have remained involved with the National Corvette Museum ever since,” said Kramer. “They say you come for the car and you stay for the people, and that’s definitely true with Corvette. Coming to events in Bowling Green brings back great memories and it’s an opportunity to share Corvette history with those new to the hobby. I’m looking forward to the 22nd Anniversary Celebration and Corvette Hall of Fame induction Labor Day weekend and the opportunity to be inducted into a group of Corvette elite.”