By corvettemuseumSeptember 2, 2016February 18th, 2021No Comments 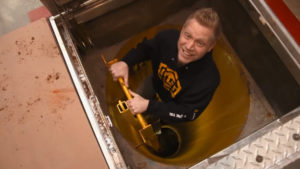 Nick Hoffman ventures into what’s left of the Corvette Museum sinkhole and cave.

While the now infamous Corvette-swallowing sinkhole at the National Corvette Museum was an unfortunate event, the occurrence continues to bring opportunities for media coverage to Bowling Green. Such was the case early this spring when Ugly Duckling Entertainment visited, filming segments for the new show, Nick’s Wild Ride, airing on the Outdoor Channel.

Show host Nick Hoffman is an award-winning country music artist whose passion for travel and the outdoors takes him to the world’s most interesting places. After 12 years as the fiddle player in Country Music Star Kenny Chesney’s Band, he struck out on his own and scored two hit songs with country trio “THE FARM”. Now, Nick’s Wild Ride, shows people a side of Nick Hoffman they’ve never seen. Part traveler, part hunter, part historian, with some party-guy sprinkled in, you never know what he’ll do next.

Nick is no stranger to the National Corvette Museum. Kenny Chesney gifted him with a 2010 Cyber Grey Corvette Grand Sport which he took R8C Museum Delivery on. Then, in 2012, Nick loaned his prize Corvette to the Museum for a special “Country Music Stars and Cars” exhibit.

On the show, viewers will join Nick as he travels the world to explore the sights, sounds, food, culture, and music of the places he hunts and fishes. You never know what will happen when Nick gets his hands dirty as he digs deep into what makes these places tick. Nick hunts for non-typical species in non-typical places and soaks up whatever craziness comes his way in the process.

While at the Museum Nick had the opportunity to travel over 30 feet down a manhole leading into what’s left of the Museum’s international news-making sinkhole and cave with Daniel Decker, Maintenance and Preservation Coordinator for the Museum’s car collection. “Seeing that sinkhole and cave firsthand was a sobering experience because it is so evident how amazing and lucky it is that no one was on that museum floor when it caved in,” shared Nick. “Nobody could’ve lived through that collapse. I’ll never forget it… the quiet gravity of being down there.” 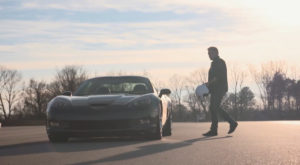 Nick Hoffman takes a spin in his 2010 Grand Sport at the NCM Motorsports Park.

Of course a visit to the Gateway of All Things Corvette is not complete without a few laps at the NCM Motorsports Park. Track Operations Manager Matt Busby gave Nick a mini lesson on high performance driving, then turned him loose behind the wheel. “The track was amazing! It’s so cool that so many people banded together to support such a project,” said Nick. “And to be able to drive my Corvette like it was MEANT to be driven across the highway from where it was built… A dream come true!”

This season of Nick’s Wild Ride features 13 episodes, with the National Corvette Museum and NCM Motorsports Park being featured on episode 110: Fast Cars and Fast Bucks. The episode first airs on Friday, September 2, 2016 at 6:30pm CT on the Outdoor Channel. Learn more about the program, watch clips, and see additional air dates and times at http://outdoorchannel.com/nicks-wild-ride.