By Mariah HughesFebruary 25, 2021No Comments

New to the floor and paired with the 2014 SAM Arrow Corvette used by driver Sam Schmidt, is a 1957 Restomod Corvette on loan from Joe Mason. Displayed along with the radically modified cars is an interactive screen, showcasing how they were each designed to empower their drivers.  The ’57 Restomod and 2014 SAM Arrow Corvette Stingray both represent dreams, passion, and innovation. A great amount of hard work and dedication were put into both cars, and their stories are unique and incredibly inspiring.

Joe Mason had wanted a red ’57 Corvette ever since he saw one for sale with his dad as a teenager. As an adult, Mason was able to purchase one and spent years working to restore it to its original beauty. He added a modern engine, transmission, and frame to create his  Restomod.  Restomods are cars that have not only been restored to their classic aesthetic, but also upgraded with modern parts and technology to run better than ever.  Keith Irwin, of Keith Irwin Restorations, helped Mason accomplish his dream of finishing the restoration. This 1957 Corvette Restomod looks and runs like new, and Mason finally has the Corvette he’s been dreaming of for decades.

In early January of 2000, former Indy Racing League driver, Sam Schmidt, was severely injured in a crash, leaving him paralyzed and seemingly unable to drive a racecar again, or so he thought. Arrow Electronics was researching ways for drivers who are quadriplegic to be able to operate a semi-autonomous racecar both safely and effectively.  In 2013, Schmidt agreed to partner with Arrow engineers to fulfill his dream of driving again. Arrow successfully accomplished their goal, and in 2014, Sam was able to drive once again. Arrow calls the groundbreaking cars Semi-Autonomous Motorcars, or SAM for short.  At present, Arrow has successfully modified a 2014 Stingray, 2016 Z06, and a 2020 C8 Stingray.

Make plans to see this most interesting exhibit today at corvettemuseum.org/plan-a-visit. 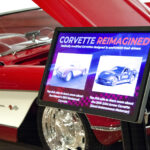 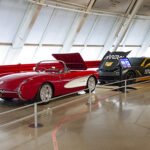