The 4th Annual Atlanta Concours d’Elegance, set for October 19 and 20, blends the historic atmosphere of its new location – the original Fort McPherson Army base at Tyler Perry Studios – with the vibrant community of South Atlanta, all while showcasing vintage and modern-day vehicles from some of the rarest collections to be found nationwide. The first premier Concours automotive event to grace the metropolitan Atlanta region, it includes more than 180 vintage and collectible entrant vehicles on Sunday, as well as approximately 200 rare and high-interest privately owned automobiles on display Saturday.

The National Corvette Museum will partner with the Concours by displaying three iconic Corvettes: a 1953 Corvette, one of only 300 made the first year America’s Sports Car was produced; the 1968 Astrovette, a concept Corvette created as part of an aerodynamic study; and the 1977 Murphy Knives SCCA Corvette Racer. It’s notable to mention that the Astrovette has been housed at NCM since its restoration in 1992, and the Atlanta Concours will be its first public showing in nearly 30 years outside the Museum. 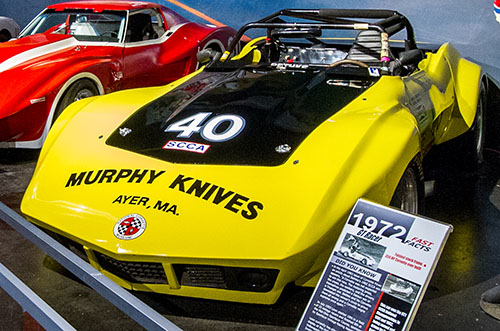 “We were invited by the Atlanta Concours because they knew it was the Museum’s 25th Anniversary and they wanted to celebrate the Museum at the Concours,” shared Derek Moore, Director of Collections / Curator for the National Corvette Museum. “I have also been invited to serve as a judge for the Concours and am looking forward to sharing our passion for Corvette. For me it’s an opportunity to bring the Museum’s story out to people who have not yet had the opportunity to visit us. We get to share the cars with a large audience outside of Bowling Green.”

In addition to the Museum’s three Corvettes, five of the Corvette Clubs in the Atlanta area are also involved and will be participating throughout the weekend.

“When the Atlanta Concours team visited NCM earlier this year, we realized what a natural fit the Corvette brand provided for the regional audience. The timing was ripe to showcase our milestone with the ever-growing Atlanta show,” said Moore.

According to Harry Krix, co-chairman of the Atlanta Concours d’Elegance, the Corvette marque has been one of the most prevalent additions to the overall concours since the show’s inception in 2016, especially for entrants with their own collectible models from the ’50s and ’60s. “The significance of the notable Corvettes that NCM will be sharing with us elevates an already popular segment at our show to new heights, and we’re proud to be one of the few concours events that can blend its participants passion with a true historical legacy.”

Saturday’s activities include an invitational Cars and Coffee at the Concours featuring cars selected by the Concours team. The chosen automobiles will be displayed on the parade field and compete in the ‘Magnificent Seven’ competition. Cars will compete in two classes: General and Preservation. Judges will select seven exceptional cars in each class from the show field to participate in Sunday’s Concours within their own unique classes. The ‘Magnificent Seven’ is the first program of its kind offering a Concours role to non-Concours-ready vehicles.