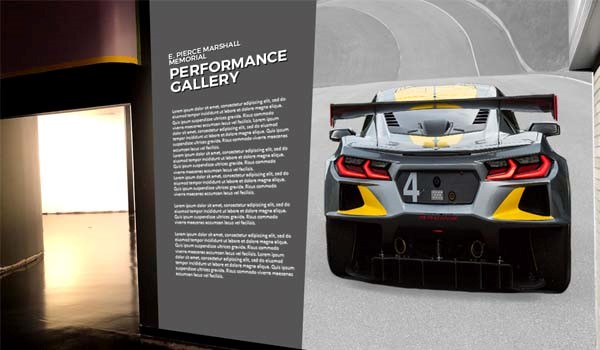 While an official reopen date for Kentucky’s museums and other tourist attractions has yet to be announced by Governor Beshear, fans of the Chevrolet Corvette have a new way to connect with the National Corvette Museum and experience a taste of the improvements that have been in the works for the past six months.

“We kicked off renovations last November, and have been hard at work on the new E. Pierce Marshall Memorial Performance Gallery ever since,” shared Museum Director of Collections / Curator Derek E. Moore. “For those who have visited us in the past, we think they’ll be impressed with the upgrades we’ve been able to make to the space. And for those who have yet to visit, they’ll be equally impressed by technology as advanced as the car it celebrates.”

Only 100 enthusiasts will be allowed to tune in for a first look at the new exhibits. A private live stream will showcase the artifacts, technology, cars and even the people behind them.

Corvette Hall of Fame inductee Gib Hufstader, who was a member of Zora Arkus-Duntov’s inner circle of engineers, will share his insight into the Corvette SS and how that car, perhaps more than any other, embodied the spirit of racing that Zora desperately wanted to have.

Hall of Fame inductee John Heinricy will also participate in the virtual event as he was heavily involved with the 1989 Corvette ZR-1 “Record Run” car that’s featured in the gallery – a display that pays homage to the team that set 12 international world time / distance speed records in a ZR-1 and L98 Corvette, averaging as high as 175.885 mph over a 24-hour period.

The program will include a special appearance by former Corvette Racing driver and Hall of Fame inductee Andy Pilgrim before Racing Program Manager Doug Fehan joins in to share a few stories that only Doug can properly tell.

Viewers will have the rare opportunity to hear a few of the cars crank up, with a peek under the hood, followed by a Q&A session.

As a bonus, Derek will venture into the Design and Engineering Gallery for another sneak peek – this time to show viewers the progress being made on ‘The Vision Realized: 60 Years of Mid-Engine Corvette Design.’

“General Motors approached us about an exhibit they were developing, which focuses on the key vehicles that built the foundation for the 2020 Corvette Stingray,” shared Derek. “It features original renderings from our Museum alongside photographs, artifacts and ephemera from both the GM Design Archive & Special Collections, and GM Heritage Center. We are excited to be the first location to display the exhibit.”

Wrapping up the unique opportunity is a look at the new ‘Entombed Corvette’ display, showcasing the iconic 1954 Corvette that had been ‘cemented in history’ for 27 years, an exhibit made possible through the generosity of Robin and Mary Vann of the East TN Corvette Club.

“We are appreciative of Pierce Marshall, Jr., the Vanns and so many others for their financial support which helped us make these amazing improvements to the Museum,” said Dr. Sean Preston, President and CEO of the National Corvette Museum. “This year we celebrate the Museum’s 26th Anniversary, and many of these galleries have not changed since the opening of the Museum in 1994. We’re excited to share a peek at the renovations with our supporters, and look forward to announcing our grand reopening soon.”

The virtual, interactive experience is Thursday, May 7 at 11 am CT. Access to this once-in-a-lifetime opportunity is available for a $100 tax deductible donation to the Museum. Registration is available at https://www.corvettemuseum.org/event/e-pierce-marshall-memorial-performance-gallery-virtual-sneak-peek.