By corvettemuseumSeptember 3, 2015February 24th, 2021No Comments

It’s official! A year and a half after a large sinkhole formed in the Skydome of the National Corvette Museum, the 13 story iconic landmark is back, better than ever, with all eight “sinkhole Corvettes” returned to display. Though the Skydome re-opened to visitors on July 6, a ceremonial ribbon cutting (or rather, caution tape cutting) was held as part of the Museum’s 21st Anniversary Celebration.

What could have been a major road block for the Museum became more of a speed bump as the sinkhole is credited with the 67% increase in visitors for 2014. Instead of immediately filling the sinkhole and restoring the Corvettes, the Museum “made lemonade” and embraced the international news-making occurrence, putting nature’s handiwork on display for most of 2014.

“The success of the sinkhole saga could not have been possible without the help and support of several key players,” said Katie Frassinelli, Museum spokesperson, at the dedication event. Frassinelli stressed how fortunate the Museum was that no one was in the building when the collapse occurred while thanking the construction crew and insurance company for also embracing the new attraction. “They have entertained our crazy requests – from saving sinkhole boulders for our landscaping, to salvaging dirt and rock that we bottled for sale in the Corvette Store,” she said. Frassinelli also commented that much of the Museum’s positive outcome from the sinkhole collapse is a result of being able to release video footage of the collapse as it occurred, and later allowing visitors to stand mere feet from the sinkhole to get an up close view.

“There is one chapter left to our story,” Frassinelli said. “Late this fall we are excited to welcome a special exhibit called Corvette Cave-In: The Skydome Sinkhole Experience. Visitors will learn the particulars of sinkholes, karst landscapes, and caves as well as what happened, why it happened, details on the eight Corvettes and how they were recovered and restored, and how the building was structurally repaired. The tour ends as the cave they are visiting virtually collapses over their heads to reveal their location underneath the Museum.”

The ceremony concluded with the caution tape cutting before rolling into a seminar on the restoration of the 1992 “1-millionth” Corvette. After more than four months and 1,200 man-hours of painstaking craftsmanship by the GM team, the restoration of the milestone car is complete, and the Corvette was unveiled in the Skydome.

“As the one and only 1-millionth Corvette, its preservation was important to us as the designers of the vehicle – and as Corvette enthusiasts,” said Ed Welburn, vice president of GM Global Design. “The damage was significant in many ways; however we have one of the most highly skilled specialty shops and team of people in the industry, so they were fully prepared to take on the challenge.”

“Chevrolet is proud to have helped restore this extremely significant car in Corvette’s long, storied history,” said Mark Reuss, GM executive vice president, Global Product Development, Purchasing and Supply Chain. “When we disassembled it, we found that each employee involved in building it had signed a part of the car, which was fantastic and moving to see. It brought the history to life, and reinforced the importance of the project.”

Despite extensive damage, GM’s team vowed to preserve and repair as many original components as possible – a decision that involved posterity as much as history, in order to preserve those signatures of the Bowling Green Assembly workers who built the car.

Only two signed components couldn’t be saved, so the team had the autographs scanned, reproduced as transfers and placed on the replacement parts. 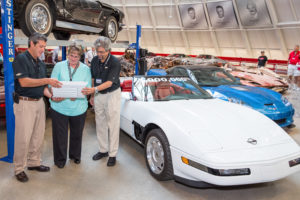 During the restoration of the 1-millionth Corvette, the 1992 Corvette damaged in the sinkhole disaster at the National Corvette Museum, Chevrolet found hundreds of workers signatures on the vehicle from workers during its production at the Bowling Green Assembly plant. Chevrolet was able to save all of the signatures except for one – from retired General Motors employee Angela Lamb, who recreates her signature on a panel of the car before it is reattached – to complete the restoration process Thursday, September 3, 2015 at the National Corvette Museum in Bowling Green, Kentucky. GM Global Design Fabrication Operations Director David Bolognino (left) and Executive Director Global Chevrolet Design John Cafaro hold the panel for Lamb. (Photo by John F. Martin for Chevrolet)

One component with a single signature from Bowling Green Assembly employee Angela Lamb was too damaged to save or even accurately scan for her autograph. Lamb joined event attendees for the big reveal, signing her name on the replacement part. The 1-millionth Corvette is now historically accurate down to the last signature.

Among the parts replaced were the hood, front fascia and the lower panels between the front wheels and doors, as well as a number of ancillary supporting components under the hood. The replacements came from a vehicle of the same vintage and color, ensuring authenticity of the parts and materials involved with the restoration.

A few other components, such as the rear fascia and front exhaust system, would have probably been replaced in almost any other restoration project, but the team repaired them because they were also covered in signatures.

Additional highlights from the restoration:

Surprisingly, the one component the team didn’t have to replace was the crushed windshield header. When the car first rolled into the shop, an overhead crane was used to raise it enough to make the car drivable, but the frame pulled up surprisingly close to the original position, encouraging the team to save it.

“The header restoration was a wonderful surprise for what everyone assumed would be the toughest aspect of the restoration,” said Bolognino. “With access to the original specifications, we got it spot-on – and even the new windshield glass dropped in perfectly.”

The final touch was replacing the unique “1,000,000th” windshield banner it wore when it rolled off the assembly line 23 years ago. The computer graphic file used for the original was still available, allowing creation of an identical banner.

The 1-millionth Corvette is the second sinkhole-damaged Corvette that Chevrolet has restored. The first, a 2009 Corvette ZR1 prototype known as the Blue Devil, was only lightly damaged and was returned to its original condition last fall.

The National Corvette Museum’s new Maintenance and Preservation Department will restore the third car, a 1962 Corvette. The five additional Corvettes swallowed by the sinkhole will remain in their as-recovered state to preserve the historical significance of the cars.

FAST FACT: The 1-Millionth Corvette rolled off the assembly line as a convertible with a white exterior and a red interior – just like the first Corvette produced in 1953.