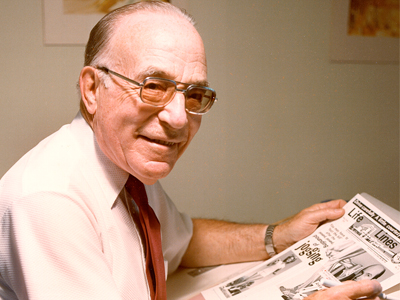 Corvette Hall of Fame Inductee, Myron E. “Scottie” Scott, is most recognized as the man who gave America’s Sports Car – the Corvette, its name. For 22 years, he served as an artist, photographer and art director with the Dayton Daily News. In June 1933, he photographed six boys racing wooden contraptions down Big Hill Road in Oakwood, Ohio. Scott got the idea for the soap box derby, attracting 330 participants and a crowd of 40,000. After the 1934 derby at Burkhardt Hill, Chevrolet decided to sponsor the event nationally with Scott in charge of the Akron race. Chevrolet sponsored the derby until 1972.

In 1937, Chevrolet hired him as an assistant director for the Public Relations department, where he was responsible for photography of new cars, designing of press kits, graphics and special events. In 1953, a special executive meeting was arranged to find a name for a new Chevrolet sports car then in the developmental stage. The company wanted a name that began with a “C” and a review of over 300 names began.

No name satisfied the group, until that night at Scott’s home when he searched the C section of the dictionary and stopped at the definition of “corvette” – a speedy pursuit ship in the British navy. Scott suggested “Corvette” the next day and the group loved it. His contribution to the image of Chevrolet spanned over three decades, before retiring from Chevrolet in 1971. Mr. Scott passed away on October 4th, 1998 at the age of 91.