Museum To Be Featured on National Geographic Series 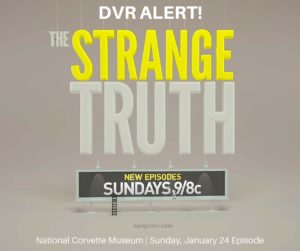 Just when we thought our five minutes of fame were over, National Geographic has launched a new television series, which is set to include the National Corvette Museum’s sinkhole in an episode this Sunday, January 24th. According to the National Geographic website, The Strange Truth is “a smart, unexpected series that explores, illuminates and documents the hard to believe, the mind boggling and occasionally insane secret history of everything. From bizarre science to unnatural nature, very real conspiracies and too-far-out explorations, nothing is left but the strange truths of it all.”

Interviews for the Museum’s segment were filmed last October (2015) in Washington, D.C. while original footage and photos of the sinkhole were provided by the Museum to the show’s editors.

“Everyone loves the Corvette Museum – marketing went nuts for it,” said Amy Briamonte, a Producer for Creative Differences who created the show for National Geographic. According to Amy, the Museum is in a 7-minute segment that also talks about Siberian craters.

The Sunday, January 24th episode is the third episode in the series and airs at 8pm Central. Check your local cable listings, and for more information on the series visit http://channel.nationalgeographic.com/the-strange-truth/.

You can check out a short trailer that began airing in December, 2015 here: