On Tuesday, March 10 the National Corvette Museum celebrated the first Museum-delivered 2020 Corvette. Glenn and Andrea Johnson of Port Neches, Texas were the first customers to pick up their ‘next generation’ mid-engine Corvette through option R8C, the Museum Delivery Program.

When ordering a new Corvette, customers may select option “R8C,” designating their car for Museum pickup. The ‘red-carpet’ VIP experience includes signage welcoming the customers to the Museum, a guided tour of the Museum where their Corvette is on display (and plant tour when available), a quality and detailed orientation on the car followed by celebratory drive out of the Museum for photos. Delivery customers are provided with the opportunity to take an NCM Motorsports Park-owned Corvette for touring laps around the road course to round out their day.

VIN 29, a Torch Red Stingray Coupe, arrived on Friday, March 6 along with ten other R8C optioned cars and one car for the NCM Motorsports Park. This was the first R8C Delivery for the Johnsons, and the sixth Corvette they have owned. Glenn joined the Museum’s board of directors in 2015 and currently serves as chair.

“Being involved with the Museum, I felt that not only does their Delivery program do such a good job, but it is also another way we can support the mission of the Museum,” shared Glenn.

The Johnsons first purchased a 1982 Corvette, which they kept for several years. In 2005 he and wife, Andrea, had retired and shortly thereafter purchased a 2007 Convertible. It was a car that they traveled very little in at the time. While googling Corvette, Glenn came across the website for the National Corvette Museum and decided to join as a member. They’d visited Bowling Green in 1989, touring the Corvette Plant, but had not returned since.

“I got online and saw where the Museum was having an annual celebration, and asked Andrea if she’d like to go to Bowling Green. She said, ‘you’re actually going to take your car?’ It’s a day and a half drive for us. But we got in the car and came!”

Glenn recalls being warmly greeted and thoroughly impressed with the facility. The Museum was under construction with a new addition. That evening at the hotel he met other Corvette owners and became fast friends. “They saw us in our Corvette shirts, and we started talking about Corvette and the Museum. We learned they were very involved and big supporters of the Museum, involved with their clubs back home, and they drove their cars. If they got a rock chip, it was a badge of honor.”

By the time the Johnsons left Bowling Green, they were Lifetime Members. Since that time the couple have joined various Museum giving groups including the Spire Society, NCM Circle of Friends, and annual Winner’s Circle. Andrea joined Elfi’s Silver Pearl Sisterhood as well.

“We thank the Johnsons not only for taking delivery with us today, but also for their thirteen years of supporting this nonprofit foundation,” shared Dr. Sean Preston, President and CEO of the National Corvette Museum. “People like Glenn and Andrea are the lifeblood of this organization and we love being able to celebrate such a fun and exciting day like this with them.”

The Museum will deliver nearly 600, 2020 model year, Corvettes over the next several months. This year marks the 25th Anniversary of the Museum Delivery Program, with over 12,000 Corvettes having been delivered at the Museum since the program’s inception.

Commemorative items that are incorporated into the Delivery Program include the option to place a unique decal on the inside of the drivers’ door jamb to signify that the car was picked up at the Museum. Customers are presented with an individual one-year NCM membership, special lapel pin and a recognition plaque. R8C delivered Corvettes also feature a special license plate frame, and an interior nameplate with the customer’s name, date of delivery and VIN inside the car. Exclusive NCM Delivery merchandise may be ordered by participants. Customers who are bringing children along for the experience can notify the Museum to receive special perks through the Glazer Family Delivery Program.

Deliveries can be viewed world-wide on the Museum’s webcams at corvettemuseum.org. New Corvette buyers can add option code R8C to their order through any dealer. The program is an additional $995. Additional details on R8C and other unique programs is available on the Museum’s website. 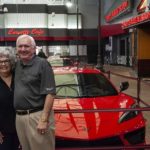 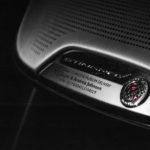 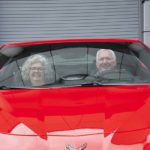