By Corvette MuseumSeptember 5, 2020No Comments 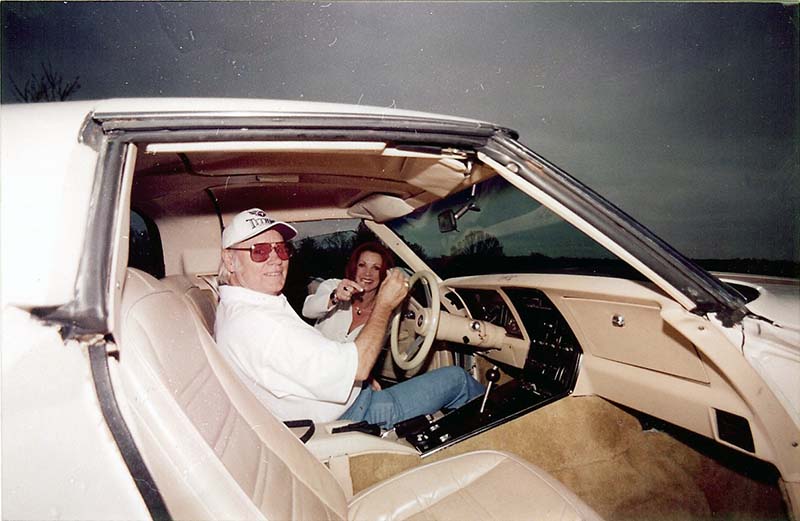 George Jones in his 1978 Corvette

The National Corvette Museum unveiled a newly acquired Corvette that will be the first celebrity-owned car to join the collection on Friday, September 4, 2020. The 1978 two-tone Corvette was special ordered by Country music singer George Jones and features a one-off paint scheme of Corvette Dark Brown and Corvette Light Beige. Jones special ordered the car in the two-tone scheme because he liked the Pace Car look.

The car was acquired thanks to the generosity of Lifetime Members Lon and Anne Helton of Nashville, TN and Timothy and Donna Vincent of Broussard, Louisiana.

Lon Helton, Past-Chair of the NCM Board of Directors and host of the radio series Country Countdown USA, was eager to support to Museum in the acquisition of the Corvette. “When Sean first presented this at the board meeting, it seemed like a no brainer. My whole life has been my two passions – Country music and Corvette – two uniquely American, iconic things. If our name wasn’t on this, I’d get questions from friends and relatives saying ‘Geeze, you’re in the Country music business, and this is a Country music car and someone else’s name is on it? We are glad to have our name on something for years to come that’s tied to our two passions.”

Helton shared that while he was still up and coming in the Country music industry at the time Jones owned the Corvette, he did get the opportunity to ask him about the car years later. “In 1986 or ’87 when I was doing one of my first interviews with him, I asked him if owning a Corvette affected his decision to cut the song called ‘The Corvette Song’ and he said, ‘Oh, absolutely.’”

In 2000, Valarie C. Lee purchased the car from Jones and had him autograph the dash. It was later sold to Ronnie Collins. Collins knew his friend Donna Vincent was a huge George Jones fan, and contacted her and her husband Tim when he decided to sell “The Possum” (the Vincent’s nickname for the Corvette). The car came with Jones’ front license plate which reads “Possum” and a Tennessee plate reading “NO SHOW”.

“In 2012 we loaned the George Jones Corvette to the Museum for a Country Music Stars and Cars exhibit so when we decided to let go of the car, the Museum was the first place we thought might be interested in it,” shared Timmie Vincent. “We were excited to partner with the Helton’s to preserve it’s history and make the Museum it’s permanent home where it can be enjoyed by all.”

“This will be the first celebrity owned Corvette that the National Corvette Museum has in its collection. We’ve had celebrity-owned cars on loan, but this is the first we will own,” shared Director of Collections / Curator Derek Moore. “Having this Corvette helps us talk about the cross-cultural impact that the Corvette has. It’s an affordable car that the masses can purchase but it’s also a car that celebrities own, love and drive.“

Thank you to the Heltons and the Vincents for their dedication to preserving Corvette history!