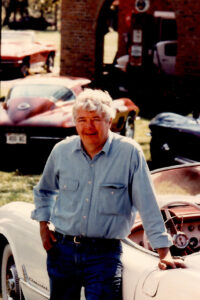 Key to the success of Corvette has always been this trinity of forces between GM, racing and the enthusiast. It is interesting to note that when there wasn’t a factory racing effort, enthusiasts stepped up to fill that gap with privateer teams. When performance suffered due to government mandated regulations, enthusiasts kept buying Corvettes as Chevrolet worked to overcome those obstacles. When GM was in trouble back in 2009, the Corvette Race team continued to race, reminding everyone that we all had something worth fighting for. Today, it is that customer interaction, tech transfer from the race team, and a commitment from GM to the car and customer, that has led us to the most revolutionary, advanced Corvette ever, the 2020 Stingray Corvette.

In short, it took all of us to get here.

The Corvette Hall of Fame reflects this relationship by honoring someone from each of those categories. This year, representing the enthusiast, is Dr. Mike McCagh, or Maryland Mike as the likes to be called. For decades he has been there helping other enthusiasts to preserve the originality of their Corvettes, while also inspiring the next generation to appreciate these amazing cars themselves.

This is his story.

Mike was the oldest of nine children, and the first of his siblings to buy his own car–a 1949 Chevy coupe. Although Mike has an appreciation for originality now, at 16 years old he also wanted to go faster than the 216 Blue Flame straight-six would go. This prompted him to get out the tools and put a big Oldsmobile engine in it, thus beginning a lifelong love for wrenching on cars. That Chevy is still in his family today, owned now by his daughter, Casey.

The more that he worked on his car, the more intrigued he became with how automobiles were designed and engineered. Fueled by this curiosity, Mike found ways to make his Chevy the fastest car in Cumberland, Maryland. In the early 1960s, his car was the one to beat. His reign ended however, when a 1957 Corvette showed up to race. “I just loved the look of the taillights on that Corvette,” Mike recalls. “Although I hated to see them in front of me. None-the-less that’s the way it went that night.”

That 1957 Corvette not only won the race, but it won Mike over too, starting a life-long love of America’s sports car. In 1970 he would buy his first Corvette, and you guessed it, it was a white, 1957 fuelie, that he still owns today.

While he always worked on cars, Mike still managed to focus on medical school, his internship, and residency. By then he had also started a family, so when free time came along, his idea of a family outing would be to go to NCRS meets with his wife and kids in tow.

“Cars have always been a mainstay in our family,” says his daughter Chrissy. “Life usually revolved around Corvette events. Vacations were always planned to incorporate as many Corvette functions as possible. We always drove to the National NCRS Convention wherever it was being held.”

Throughout it all, Mike’s children began to share his love for the automobile, learning an appreciation for the classic cars, especially those that came from Chevrolet. “I have always preferred the bow tie to the blue oval,” Mike chuckles.

When Mike got started with Corvette it was in the days when Corvette clubs were the best source for finding parts and advice to keep those cars going. “When the NCRS was founded in 1974, that was something I knew I had to be a part of. I joined as soon as I heard about them. It was pretty soon after they got started as my membership number is #14.”

The objective of the NCRS, for those who don’t know, is help Corvette owners to restore and preserve their cars to a point of “factory originality.” They release articles and judging manuals to help owners get their cars to be exactly the way they were when they rolled off the assembly line. The NCRS also conducts meets around the country where certified judges examine cars looking for any areas that need attention. Corvettes that meet their highest standards are given the NCRS Top Flight Award. Earning that award is not easy, requiring meticulous attention to every single detail of the car.

After that award is earned that car is then eligible to earn the Duntov Mark of Excellence Award. It is only given to cars that pass additional rigorous on-road evaluations. These awards are highly coveted in the Corvette community to the point where some of the world’s most prestigious collectors, like Rick Hendrick (NASCAR team owner, and Corvette Hall of Fame inductee) has had his restoration team take their cars to get judged. Vintage Corvettes that roll over the auction block always get special attention when they have NCRS certification.

Mike’s passion for Corvette and experience as a restorer would eventually lead to him becoming the President of the NCRS where he served for three years. He remained on the NCRS Board for a few years after that, but by his own admission he is happier working under the hood of a car than dealing with all that goes along with running a national organization. “I’d much rather focus on judging and helping to write the judging manuals,” Mike confesses. “The garage is where I’m most at home.”

One thing he was especially glad to be a part of during his presidency was the Judging Recognition Program. Formulated by Dennis Clarke, this program encouraged NCRS members to become judges themselves. By expanding the field, they were able to increase the number of judges around the country, making it easier for car owners to get their cars judged. “It’s been really successful. Prior to Dennis’ concept it was tough finding enough people to judge cars.”

While he has helped countless people through his articles and manuals to restore their cars, he is humble about induction into the Corvette Hall of Fame.

“I’m honored, but I’m not sure if I deserve to be among Zora Duntov and Dick Thompson and Jim Perkins and the others up there who have made history. I’m a private guy who doesn’t look for recognition like some people do. If I can provide a tip to someone else that helps them to get more enjoyment out of their car, I’m happy with that. My wife is excited about the Hall of Fame though,” he laughs, “so I’ll do it.”

Mike’s hope is that when people see him in the Hall of Fame with the other inductees, he will inspire people to get the most out of their cars. This something Mike has always believed in sharing, starting with his own children.

“All four of our kids are car enthusiasts,” he says proudly. “When they turned about 15, I took them to the barn and told them to pick out a car to restore with me. I helped them strip the paint, sand, prime, and even put motors in them. All four of those kids built their own first cars with me, and all four of them still have their cars to this day. By encouraging them to construct their first cars, they had a special appreciation for them. This worked out for me as I knew they wouldn’t abuse them or get in trouble with them. They took good care of those cars and always have.”

Chrissy can attest to that. “I remember my dad and I working on that 1950 Chevy convertible. It had been in a garage for 10 years and needed to be taken apart and put back together again. I drove it to high school every day when it was done. This would be the beginning of a tradition in our family. Marcy drove a 1947 Chevy through her High School years and my brother Mike has a 55 Chevy extended cab dually 4wd pickup that he built with my father. My sister Casey took my dad’s first car–the 1949 he drove as a kid. It’s a great car with one very special modification. It has the taillights of a 1957 Corvette.”

Mike is now focused on his grandkids and sees the love for cars already starting in one of them. “She is already into speed, running her little four-wheeler around the farm like it’s the Indy 500.”

Looking back on his life he can’t imagine what it would have been like without Corvette. At one point he owned 32 of them. He’s since whittled down the collection to only six Corvettes, but at the moment he is looking at a 1965 fuel injected coupe. “I have enjoyed restoring them, driving them, and sharing what I have learned about them,” he reflects. “It’s gratifying to know that the work I’ve done will help others after me to have the same kind of enjoyment that I’ve had with Corvette.” 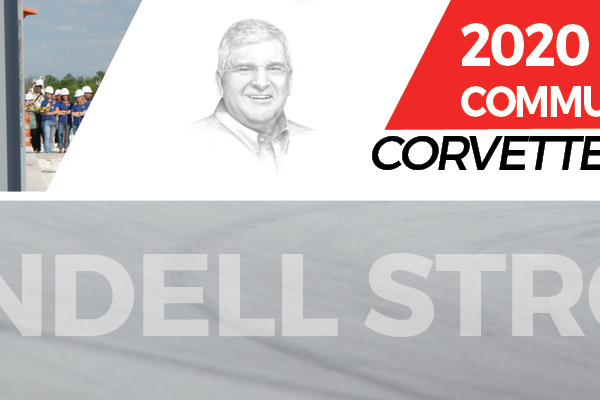