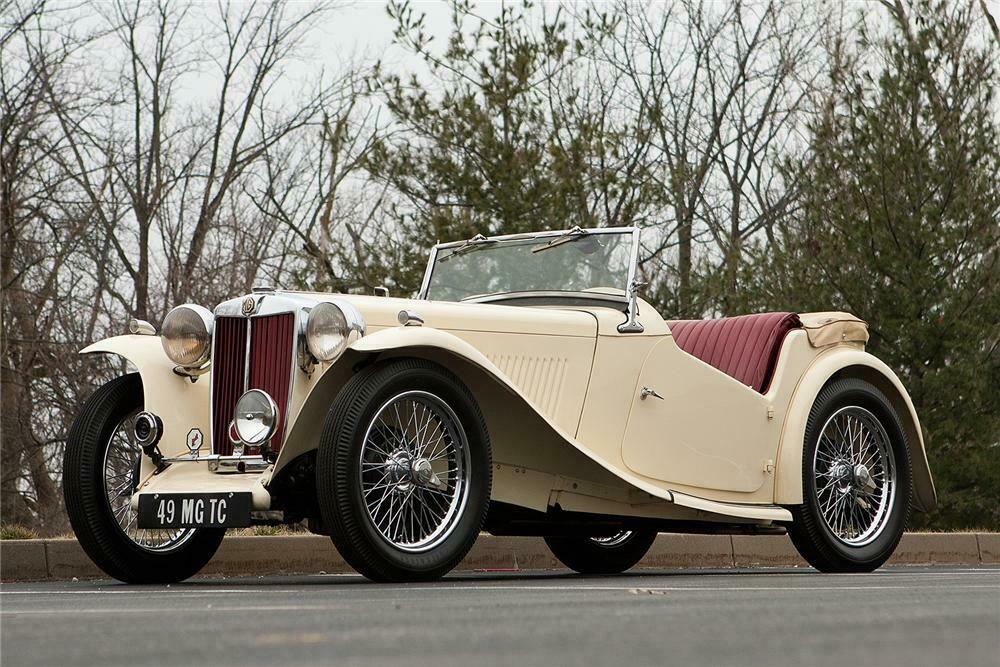 MG TC and TD Breathe Life into the First Corvette

By Corvette MuseumOctober 28, 2020No Comments 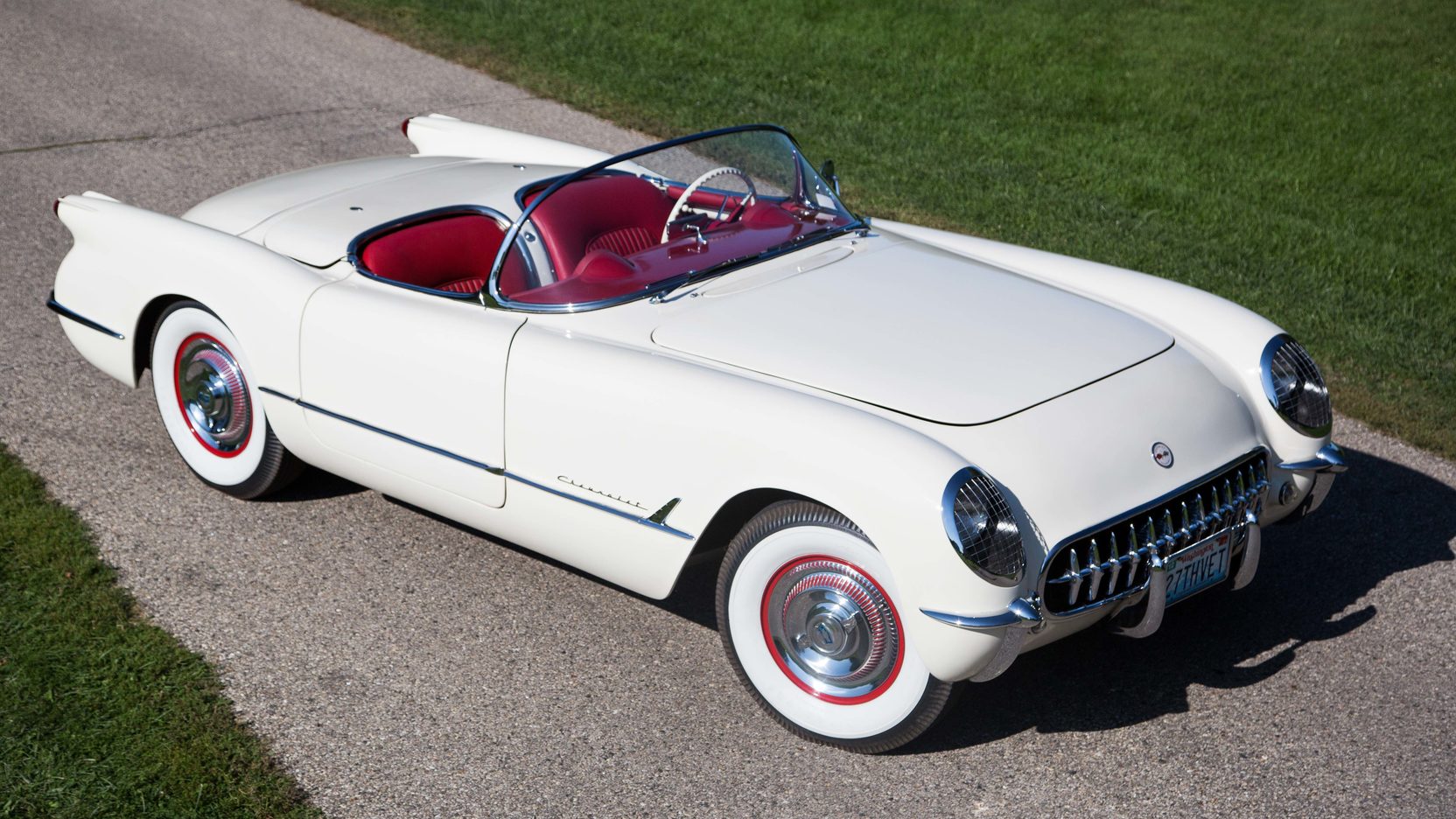 The design of the MG TC was about as far away from the original Corvette as one can get. The classic appearance of the TC design originated in 1933 and by 1946 it looked antiquated. It’s small two-place body with an upright grille, flowing front fenders, cut-down rear-hinged doors, running boards, and a fold-down windshield rode on spindly nineteen-inch wire wheels. The Corvette did not include any of the visual design cues of the TC or TD, yet, without the MG’s presence in the United States, it’s quite possible that Harley Earl’s Corvette never would have seen the light of day.

The MG TC had a something extra beyond its quirky looks that played on the emotions of sports car people, even if they didn’t yet know they were sports car people. Famous race car driver and journalist Denise McCluggage, in her book By Brooks Too Far for Leaping, describes her first encounter with an MG TC in the late 1940s: “And there it sat in [the] showroom, stunning my every sense. A loose roller-skate of a car. Perky. Absurd. Black. Swoop-doored. Red upholstery. Walnut veneer dash. Bumpers like tiny goalposts. And all incredibly there. Immediately, I ached with a hankering I had not known since childhood. I wanted that car!”

Enthusiasts around the world shared Denise’s attraction to the car. About 10,000 TCs were built between late 1945 and 1949. With Britain’s economy in dire straits immediately following World War II, the government encouraged its manufacturers to export as much product as possible to bring much-needed cash into the British economy. MG did its share, exporting the TC to South Africa, Australia and the United States. The U.S. was the biggest market with 2,000 cars imported from the manufacturer and an additional 1,500 cars imported privately. Many American military personnel fell in love with the TC during their time in England and brought TCs home with them. 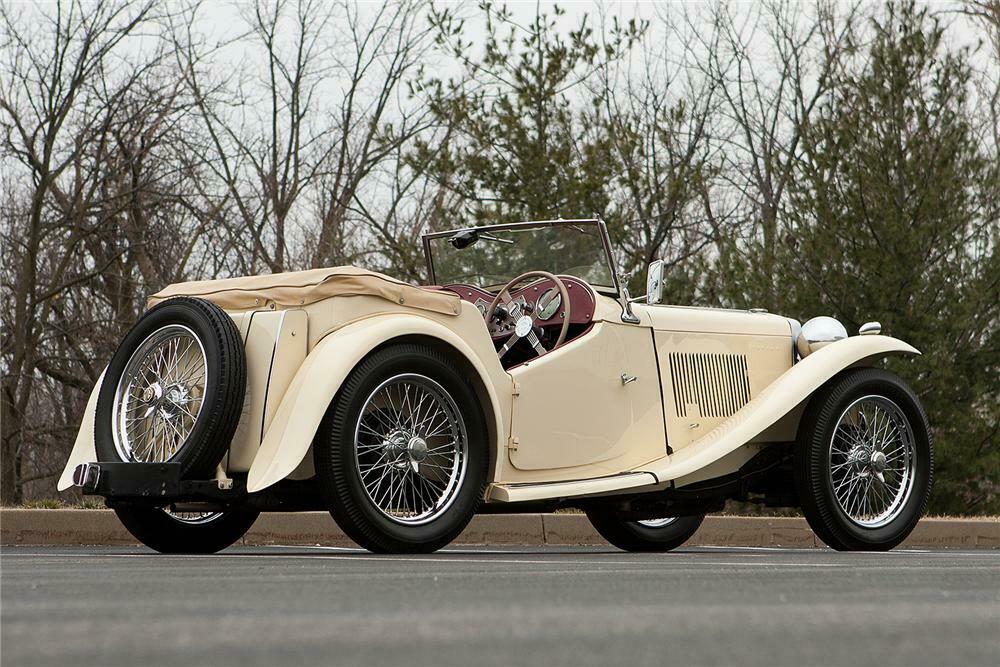 Exporting continued with the TC’s replacement, the MG TD. Between 1950 and 1953, 29,664 TDs were made with almost eighty percent (23,488) coming to the U.S. The TCs and TDs, and to a lesser extent, their British cousins from Triumph and Jaguar, sparked a sports car boom that changed America’s automotive milieu. In their driving zeal, sports car owners created clubs and organized sports car activities such as rallies, autocrossing competition, tours, and racing events. Sports cars had caught America’s attention.

The Sports Car Club of America was formed in 1944 as a car enthusiast group to organize sports car activities on a national level. The SCCA took the spark in sports car interest created by the TCs and TDs, and turned it into a full-fledged conflagration. When the SCCA began sanctioning road races in 1948, it brought road racing and sports cars into national focus. The inaugural 1948 Grand Prix in Watkins Glen, New York saw eight MG TCs among the 15 starters. A crowd to 10,000 spectators saw 10 cars finish the race, including all eight TCs. 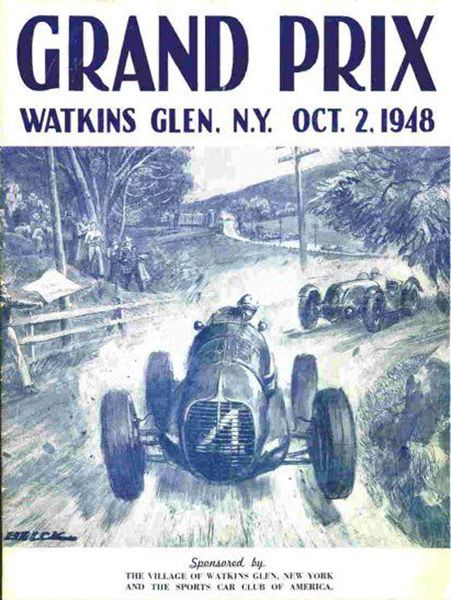 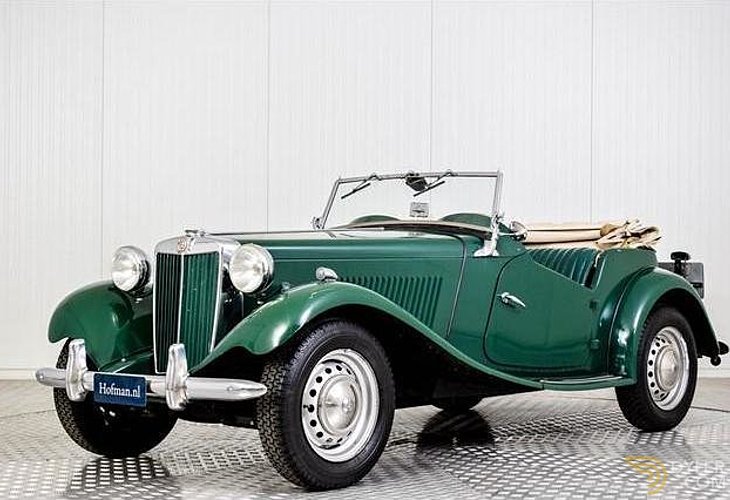 Watkins Glen was not the only hotbed for sports car road racing. In Bridgehampton, New York public roads were used for sanctioned sports car racing beginning in 1949. The next year, the Chicago region of the SCCA used roads around Elkhart Lake, Wisconsin for sports car racing. Racing took hold across America with races in Pebble Beach, California and Sebring, Florida in 1950, and races in Torrey Pines, California in 1951. America’s initial major endurance race, The Twelve Hours of Sebring, began in 1952. Sports car races across the U.S. attracting thousands and thousands of spectators, along with the increasing presence of sports cars on American roads was bound to catch the attention of astute American automakers.

General Motors didn’t become the largest automaker in the world by being asleep at the wheel. When the General Motors brass became aware of the flourishing sports car interest in the U.S., they tasked vice president Harley Earl with exploring the potential market for an American sports car. Earl was the right man for the job – he made a point of attending the major European auto shows to keep an eye on the latest features and styling trends. He also routinely attended U.S. sports car races at Watkins Glen and Elkhart Lake in the late ‘40s and early ‘50s usually accompanied by his latest concept car to get feedback from the racers, organizers and spectators. Reportedly, Earl was impressed by the passion Jaguar, Ferrari, and Alfa Romeo owners had for their cars. 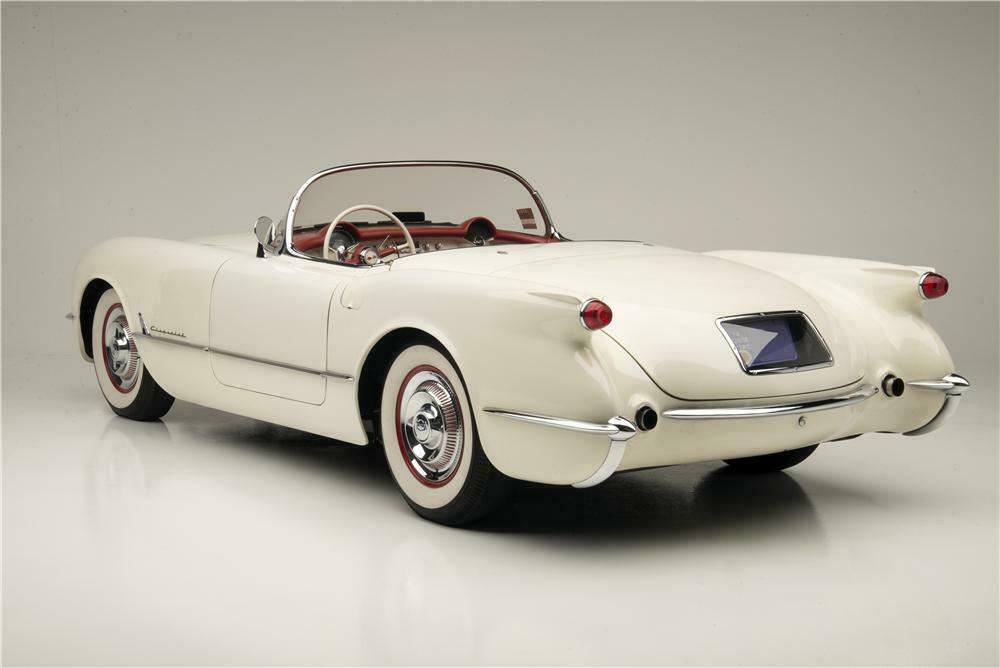 As reported by Super Chevy magazine, it was at Watkins Glen in 1951 that Earl began developing his idea for an American sports car. Upon Earl’s return to Detroit from Watkins Glen, he launched “Project Opel” in a small clandestine styling studio closed to GM upper management, choosing young designer Bob McLean as the stylist. For the project benchmark, Earl selected the Jaguar XK 120. America’s sports car project was alive!

Power and speed were not the MG T series’ forte, but what they lacked in get-up-and-go, they made up for in nimble handling and driving fun. The TC weighed about 1,800 pounds and the four-cylinder, 1,250 cc engine drove the rear wheels via a four-speed manual gearbox. Elliptical springs provided the suspension, which along with the TC’s skinny tires, made cornering an adventure. The TC had a top speed of about 75 miles per hour and a 0 to 60 mph time of 22.7 seconds. The four-wheel drum brakes gave respectable braking performance for the time. A major factor in the TC’s success was the light, nimble handling that the then-typical big and heavy U.S. cars could not match. 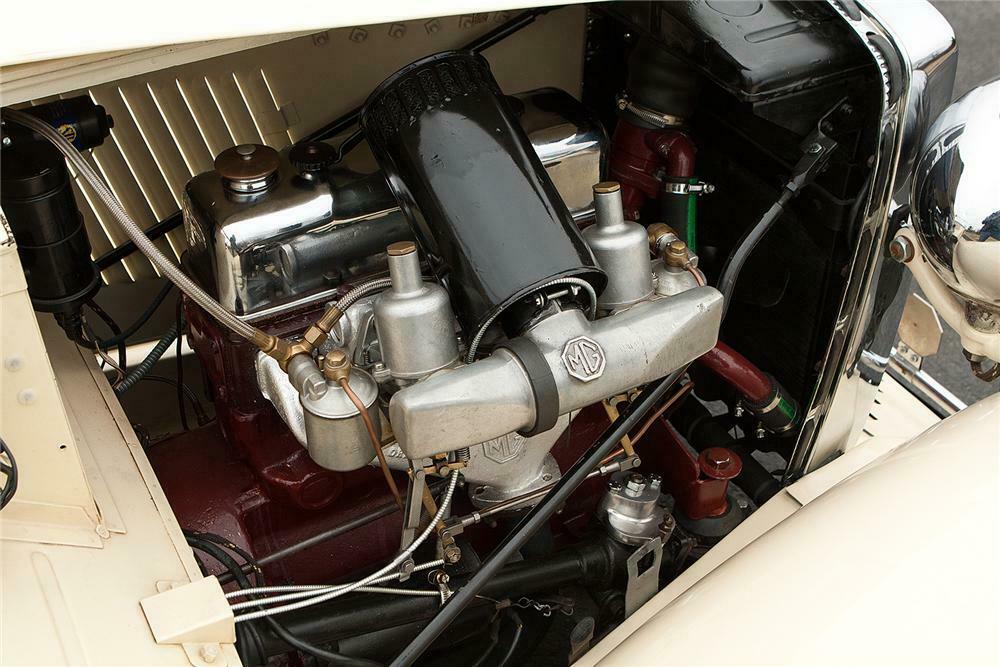 The MG TD bore a family resemblance to the TC, but was modernized with smaller 15-inch steel wheels, a coil-spring independent front suspension, rack and pinion steering, and a new four-speed transmission. While the TD had about the same horsepower as the TC, it was a bit slower due to its increased weight. The TD was also available in a competition model, the TD Mark II. The Mark II had a higher output 1,250 cc engine producing 57 horsepower, a higher rear-axle ratio, increased compression ratio and bigger valves. The Mark II was visibly distinguishable from the regular TD by a bulge in the hood over the carburetors, “Mk II” badges on the hood, and chrome grille bars instead of the regular colored bars matching the interior color. About 1,700 Mark II models were built during the TD’s production run.

Great MG TC and TD sales figures in the U.S. in the late ‘40s and early ‘50s, thanks to reasonable prices and the large number imported into America, gave sports cars a previously unseen presence on American roads. The MGs also were major attractions at early sports car races helping to attract thousands of spectators. The car sales, and the enthusiasm of large numbers of racing fans enticed General Motors to investigate the sports car market possibilities and, as they say, the rest is history—Corvette history. 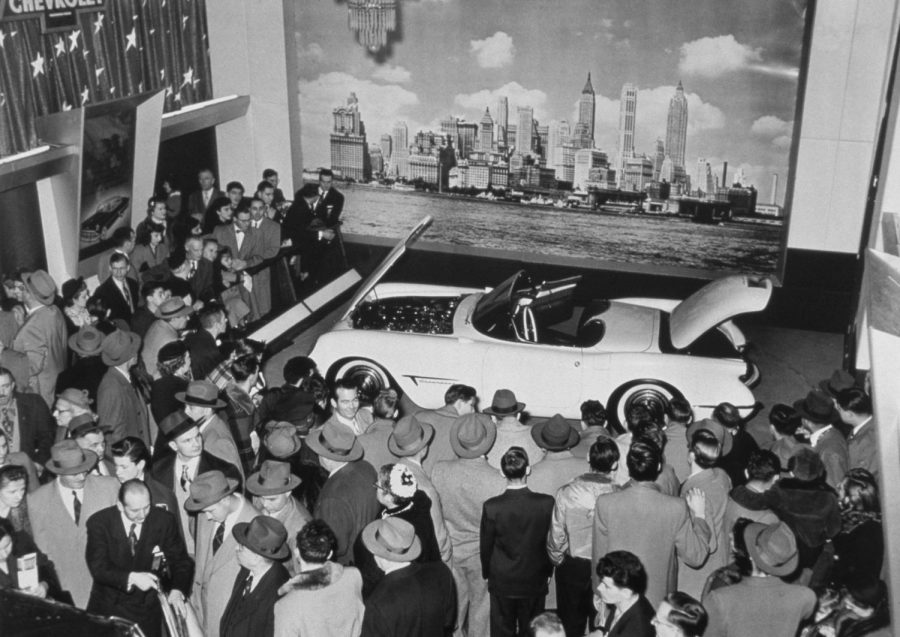 The debut of the 1953 Corvette

The National Corvette Museum is very interested in having an MG T Series car or two in their collection, or being able to borrow an MG TC or TD for future displays. Should you have a TC or TD in your stable and are interested in either donating the car to the Museum, or loaning the car to the Museum for public display in one of their exhibits, please contact the NCM Director of Collections/Curator Derek Moore. 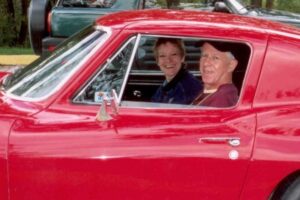 About the Author – Bruce Troxell

Bruce Troxell is a professional freelance writer who has been contributing articles on automotive and aviation topics to a variety of websites and print publications since 2009. Following careers as an engineer with a major automobile manufacturer and as a lawyer in private practice, Bruce discovered the joys of writing and has never looked back. He brings a unique perspective and an engaging conversational style to all his writings.

Bruce is a creative automotive storyteller always looking for the stories of the people behind the automobiles. The automotive world is filled with immensely talented people and people with equally immense egos. Human nature tells us that when talent and egos cross paths, there are bound to be great stories. Bruce’s goal is to track down and tell those stories.

His expertise in storytelling has been recognized by the Automotive Heritage Foundation in their annual journalism competition. In 2020, his story The Day Corvette Became a World Class Sports Car was awarded a Silver medal in the Best Heritage Motorsports Story category. In 2018, his blog Cars We Love came home with a Bronze Medal in the Best Blog or Column category.

An avid sports car fan since he saw his first professional race at Watkins Glen, New York, Bruce’s car interests have blossomed to include restomods, hot rods, custom cars, and vintage cars. He has participated in numerous vintage car rallies and is a concours veteran.

Born and raised in New Jersey, he and his wife Cindy now live in bucolic central Virginia with Max, a prescient stray cat who wandered into their lives several years ago and decided to stay.

“There’s no shortage today of enthusiast automotive writers and bloggers. Bruce Troxell, however, is unique. He writes with an understanding of what truly makes cars and car people tick. Bruce is a storyteller, not just a writer. Once you start reading his lead, you can’t stop.”  Martyn Schorr – Editor, CarGuyChronicles.com 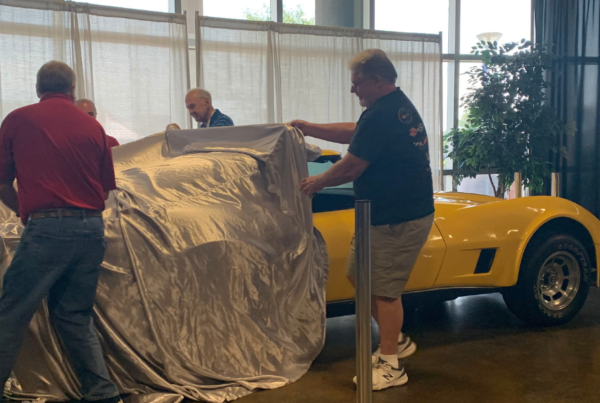 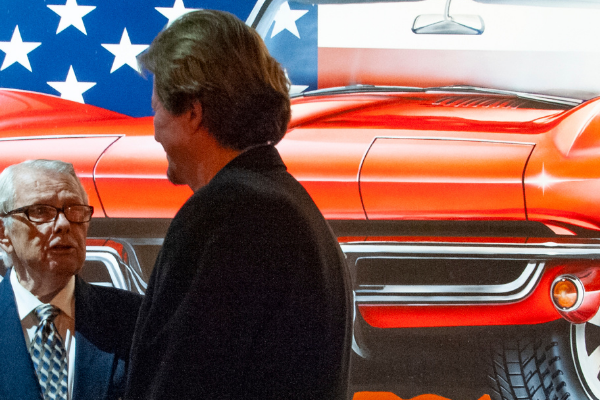