For Will Szymanski, Jr., the Corvette Gives Him Great Memories of His Late Father, Will Sr. 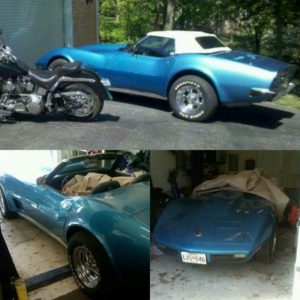 Will Szymanski, Sr. was an all-around car guy, but there was something about Chevrolets – specifically Corvettes – that always stood the model above the rest. His son, Will Szymanski, Jr., naturally being brought up by a Corvette admirer, instantly fell in love with America’s Sports Car at a young age. Now 29-years-old, the Corvette gives Will Jr. great memories of his late father and reminds him of all the wonderful times he had with his dad.

Will Sr. tragically passed away in 2008 in what his son calls a “freak accident.” According to Will Jr., his father fell off a ladder and suffered a traumatic brain injury. He was in shock trauma for two weeks before gaining his wings. Just being 20 at the time, Will Jr. said it was hard to lose not only his best friend, but his Corvette buddy.

“My father and I were best friends – we were inseparable,” Szymanski, Jr. said. “He always had a passion for classic cars of all kinds, but Corvettes always had his heart.”

Back when Will Jr. was in the eighth grade, his father brought home something that he wasn’t expecting. When Will Sr. pulled into the Szymanski driveway with a 1973 Corvette Stingray, Will Jr. says “it was game over for me.” From that point forward, he and his dad’s friendship would grow into a bond that every father and son hope to share.

Still to this day, Will Jr. can describe that very Vette his dad came home with – its specs, engine and all.

“I remember my father’s Corvette very clearly,” Szymanski Jr. stated. “It was a 1973 Stingray with a three-speed automatic 350. It was blue with dark blue interior. The car looked good when he purchased it, however in the long run we ended up doing a full restoration on it, along with upgrading the motor to a 350/385 horsepower ‘fast burn’ crate motor from Jegs, a larger cowl hood and Crager SD wheels.”

“We went to cruise nights every weekend and always took the car out for rides. We attended ‘Cruisin’ Week’ in Ocean City every May and, of course, Corvettes at Carlisle every August. The first time I ever drove the car was on my learner’s permit to Corvettes at Carlisle. That was my ‘first car.’ We picked out every part that went onto the car and always did everything together when it came to the car.”

Will Jr. said that after his father passed, for the first year he would sit in the garage at night and stare at the Vette, “remembering the good times.” He drove it only twice after losing Will Sr. and, besides that two times he took it out, it sat on a lift in the garage at his mother’s until she sold it in 2012.

Ever since Will Jr.’s mother let the beloved Vette go, he’s wanted it back in the Szymanski family. He says his mother never wanted him to have it when he was younger because she said it was “too fast,” but the real reason is because the “family didn’t take Will Sr.’s death easy,” as Will Jr. states. 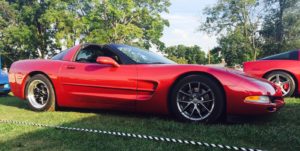 Although he owns a 2004 Corvette, in which he bought in Dec. 2010, from 2015 to now, Will Jr. has been searching desperately for the ‘73 Stingray he and his father made many memories together in.

“After returning to Carlisle with my Corvette in 2015, I decided when I got back home I was determined to find the car,” stated Szymanski, Jr. “I couldn’t find the VIN at first, and after almost a year, I finally obtained the VIN. Our insurance agent who handled my family’s auto policy actually found it because they wrote a policy for it about a month before he switched to another carrier.

After realizing the Vette was registered in Australia, Will Jr. says he went onto Craigslist and posted advertisements in all major cities of Australia and searched the VIN online, but hasn’t had any luck. “I could easily find one and make it the same and probably even do it for less cost, but I want the exact one back,” said Will Jr. “It has sentimental value to me that cannot be replaced – so the search will continue.”

Despite struggling to discover the Corvette he and his father once shared, Will Jr. honored his father in March when he made his first ever trip to the National Corvette Museum – a place he and his dad always wanted to visit together but never got the chance to. Instead of moping around this year on the anniversary of Will Sr.’s passing, Will Jr. decided to do things differently and do something his father would have loved to have done.

Thanks to the NCM Insurance team, Will Jr.’s inaugural trip to Bowling Green is one he’ll never forget.

“We booked the trip in December to head out in March,” Szymanski, Jr. noted. “I happened to call the week before we went to get a quote on my car and met Bobbie Jo (Lee). She mentioned becoming a NCM member and also asked if I was just coming for the heck of it or if there was a reason behind it. I explained my story to her and she said to come see her personally when I arrived.

“She introduced me to Adam (Boca) and the team and we talked for a while. Adam met us right before the sinkhole exhibit and took us in the back and gave us a tour we would never forget. He went above and beyond to make this experience once in a lifetime and I couldn’t thank him enough. I loved every minute of it – and so did my girlfriend.”

As soon as Will Jr. and his girlfriend entered the Museum, he says he turned the corner and witnessed the C3 exhibit, which features the 1973 – the same year Vette that he and his dad had. The son says he will never forget that moment and it’ll always be special to him because it added happy memories of he and Will Sr.

“It was a spitting image of my father’s … I almost cried,” he added. “We loved every minute of it and cannot thank everyone involved enough for making it such an amazing experience. I will absolutely be back!”