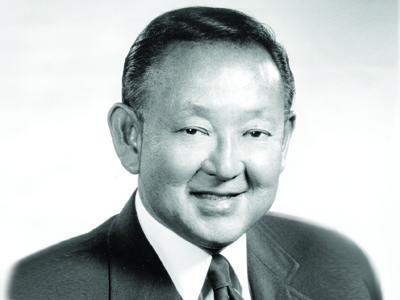 Along with Bill Mitchell, designer Larry Shinoda has been closely associated with the Corvette Sting Ray, the stunning design that debuted in 1963. The Sting Ray literally set the world on its ear. Few American cars were so instantly recognizable, so clean, and so pure. For the first time in its history, the Corvette staked its own uniquely American ground instead of looking to sports car tradition and Europe for inspiration. Larry played a major role in the execution of that design-from the original Q Corvette to the 1963 Split Window.

Born in Los Angeles of Japanese parents, Larry took to drawing images of cars when he was a young boy using broken pencil stubs. During World War II, Larry and his family, along with thousands of other Japanese Americans, were interned at Manzanar in California. While humiliating, the experience allowed Larry to showcase the benefit of a positive attitude. He amazed others in the camp by designing an armchair out of some old crates that featured a reclining back.

Besides design, his other love was racing. He joined the crew for the John Zink Special at the 1956 Indianapolis 500. The Offenhauser powered Watson racer sported Shinoda-designed bodywork and a distinctive dark-pink-and white paint scheme. And, of course, it won that year driven by Pat Flaherty. In 1968, Shinoda followed then-Chevy General Manager Bunkie Knudsen to Ford, and there he designed the Boss 302 Mustang, perhaps the most graceful Mustang ever produced. Later he established his own design company and designed everything from Roger Penske’s race trailers to the Goodyear Blimp. He also created a sleek aftermarket body treatment for the fourth-generation Corvette called Rick Mears Special Edition. He even designed motorhomes for Monaco Motor Coach.

Larry succumbed to kidney problems in 1996 and was the subject of a massive fund-raising effort for a kidney transplant. Despite his handicap, he maintained a vigorous schedule. Sadly, he died November 13, 1997, at age 67 before the transplant could take place. His sister, Grace Nakamura, said, “Creative people take risks. They see things in new ways that the establishment doesn’t agree with.” Larry Shinoda will always be seen as a creative spark that helped define for the world what the Corvette is today.