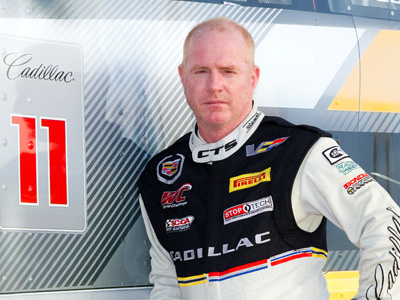 To many, race car driver Johnny O’Connell embodies what Corvette Racing is all about. Behind the wheel he is determined, focused, fiercely competitive, relentless and obsessed with victory. Outside of the car though, he is approachable, fun, engaging, and always ready to talk with fans about what makes the Corvette so great. He should know as his accomplishments include four wins at the 24 Hours of Le Mans along with being the overall winner of the Rolex 24 at Daytona in 2001. He is Sebring’s all-time winner with one overall victory and eight class titles along with being a three time ALMS Champion with 38 ALMS wins. After Corvette his success in racing continued with Cadillac Racing in the World Challenge Championship. While driving for them, he also serves as a popular commentator for ESPN, and at the same time was named Vice President of Global Operations at the Bondurant School of High Performance Driving.

“I love driving fast, and I love people.” Johnny says. “In my time with Corvette, I was able to do what I love for people I care about.”