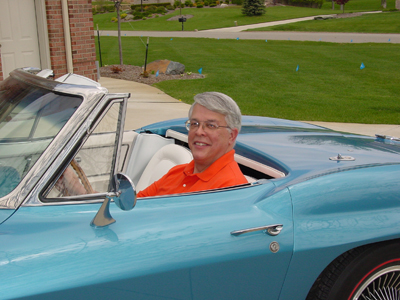 John’s career with General Motors started in 1964 as Production Foreman at the Willow Run plant in Ypsilanti, MI. Two years later he was promoted and transferred to the Chevrolet Pilot Line Plant in Flint, MI as Senior Process Engineer of Passenger Cars.

John spent time at various Chevrolet plants from 1966 to 1969 and participated in the build out of the 1967 Corvette and launch of the 1968 model at St. Louis. Through the years John held various roles, transferring to many different GM plants and in doing so developed three patents that improved quality and reduced cost.

In 1985 John was recruited by Chrysler where he remained until retiring in 2001. John has purchased and restored many Corvettes, earning Top Flight awards for his work and later becoming a NCRS 200-Level Master Judge. John is also a Veteran Bloomington Gold Restoration Workshop instructor and Bloomington Gold Midyear Certification Judge.

He has written numerous technical articles for internal General Motors and Chrysler publications, SAE papers and has had many articles published in NCRS Corvette Restorer and Corvette Enthusiast magazines.