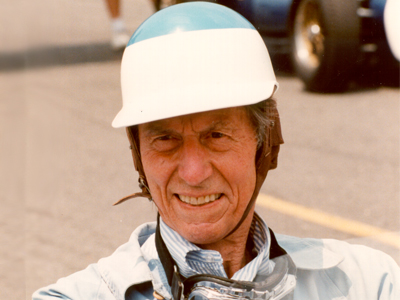 John Fitch is well known as a true pioneer in Corvette racing, and is considered racer extraordinaire. He was the Sports Car Club of America’s first national champion; he won the second Sebring 12-hour race in 1953, and in the same year was declared “Driver of the Year” by Speed Age Magazine. Fitch was the only American ever to drive for the Mercedes-Benz factory team, and also raced the Corvette “SS” and the test mule, which later became the Sting Ray Racer. He was the first manager of Connecticut’s Lime Rock Park Raceway, and is noted as one of the prime movers behind the project’s beginning, and is still involved with the raceway’s operations.

After retiring from racing, Fitch became a successful specialty car builder and safety engineer, and developed the “Fitch Barriers”, the familiar yellow crash barrels we see on highways and racetracks, which have saved the lives of many motorists. Fitch was also responsible for conducting the world’s first Advanced Driving School.