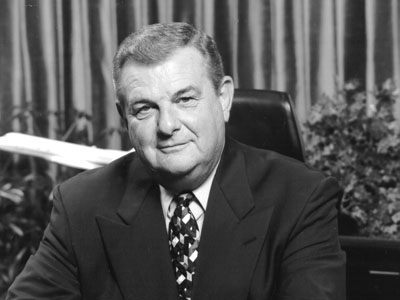 If there was a Corvette clique in Waco, Texas when Jimmy C. Perkins was growing up, he was not a part of it. Jim was more into hot-rods and drag racing, not Vettes. Little did he know he would one day hold the future of the Corvette in the palm of his hand.

Just out of Baylor University, Jim got a job in 1960 sorting parts at a Chevrolet warehouse. It launched a career that took him to the highest levels of three famous car companies and finds him today one of the most powerful (and popular) car guys in America.

Chevy was (and is) the largest car division in the largest car company in the world. For much of the ’60s, one out of every four new cars and half the light trucks sold in America were Chevys. More than 6500 Chevy dealers serviced the customer base and was served by the biggest and best field sales army in the industry. Chevy sales people bled bowtie blue and oozed with pride.

Jim thrived in their company. His route up the ladder at Chevy led him all over the country. He was San Diego zone manager, Dallas zone manager, director of customer service for the Mideast region, director of marketing policy and dealer relations for all of General Motors, and assistant general sales manager at Buick.

In 1984, Jim left Chevrolet to join Toyota. As senior vice-president of its brand-new Lexus Division, he was instrumental in the design, development, and introduction of Toyota’s first luxury brand.

Four and a half years after leaving GM, Jim did what few ex-GM executives have ever done. He came back. Actually, he was lured back. In May, 1989, he succeeded the retiring Bob Burger as Chevy general manager.

His first big job was to rekindle the Chevy pride of the ’60s in an organization demoralized by GM’s travails of the late ’80s. His manner was pure Texas: straight talk, kid gloves over iron fists. His style: up close and personal.

His symbol was a lapel pin: a tiny replica of the Chevy bowtie emblem and the single word — PROUD. Card-carrying Chevy people got their pins automatically and wore them always. Outsiders got them for exemplary deeds on behalf of Chevy. To a few, the pin was a joke. To the multitudes inside Chevy, it was a constant reminder of the power of positive thinking.

Jim did a lot in the seven years he ran Chevy. He won more truck production. He won the respect and admiration of dealers. He drove three Indy 500 pace cars. He supervised a Chevy racing program that produced five NASCAR manufacturer’s championships and six Indy 500 victories. He strengthened Chevy’s role in product design and development. He helped Chevy people come to grips with the realities of downsizing and reorganizing.