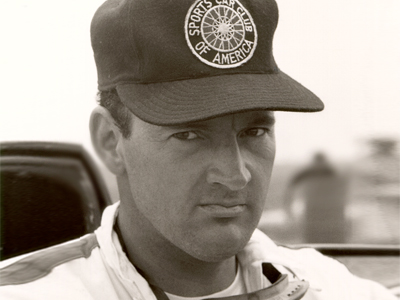 Corvette Hall of Fame Inductee, James “Jim” Jeffords was a two-time National Driving Champion, recognized for his exciting racing mark in legendary race cars and automobiles such as the Nickey Chevrolet’s “Purple People Eater”, and Chevrolet powered specials like Jerry Earl’s SR-2, the Scarab, and the Maserati Birdcage. Jeffords maintained a racing career that began almost 50 years ago. He appeared in the very first Road America race at Elkhart Lake in September 1955, and finished 2nd in C production in a Jaguar. His spectacular early success earned him his first ride in a Corvette in May of 1956 at Road America. Over the next 5 years, Jim maintained a close association with Corvette competing first in the World Championship race in Caracas, Venezula and then ending the season at Nassau Speed Week in December of 1956. Jim began the 1957 season at Sebring, Florida, as a driver on the Chevrolet Corvette Racing Team. Due mainly to a very successful season driving both factory modified and production Corvettes, Jim was invited to help form a Corvette race team for Chicago based Nickey Chevrolet in 1958. Jeffords was virtually unbeatable as he easily took the titles in 1958 and 1959 in the Nickey Chevrolet “Purple People Eater” Corvette.

In February of 1960, Jefford’s driving skill and reputation landed him behind the wheel in the first race ever for the Camoradi Corvette, the World Sports Car Championship – Camoradi USA. Jeffords drove it to a 1st place in the Grand Premio de la Habana in February of 1960, and followed it with an 8th overall (1st GT) in the Grand Premio de la Cuba on February 27th. This would be the only sports car meet open to other nations ever allowed in Cuba under Castro’s rule. Jeffords pioneered the use of the fuel-injected and RPO 684 as bulletproof racing machines. He was among a handful of race car drivers to have successfully campaigned and dominated the early SCCA “B” Production Class. Since 1958, Jeffords has served on the Board of Directors at Road America.