How Jennifer Got Around

By corvettemuseumSeptember 7, 2016February 18th, 2021No Comments 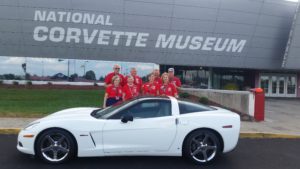 It all started in June of 2006 when Staton and Sally Boyette of Matthews, NC purchased their first Corvette, an Arctic White 2006 Corvette Coupe. The joke was that when a husband divorces his wife and finds a much younger companion, her generic name is Jennifer. So, Staton decided to keep the wife, but name the new Corvette “Jennifer.”

The Boyettes enjoyed Jennifer for about five years when Staton’s long-time friend and fellow Corvette owner, John Fort, in 2011 expressed interest in purchasing the car, which would allow Staton and Sally to move on to a new love, a 2012 Carlisle Blue Grand Sport. Staton and John had worked together in Boy Scout activities for many years so Staton and Sally felt good about passing Jennifer along to John and his wife, Carol, of Wilmington, NC.

In January, 2015 – John and Carol, who only had room for two Corvettes, sold Jennifer to their daughter Charlotte and her husband Scott Findley (also of Wilmington, NC) so they could keep their 1998 Arctic White Convertible and purchase a new 2015 Arctic White Stingray Convertible. Jennifer’s time with the Findleys was short, however, as they sold her to Hillary and Robert Dukas of Acworth, GA on May 20, 2016 to make room in their single car garage for a new mistress – a 2017 Blade Silver Stingray Convertible. Hillary had been looking for a C6 Corvette, and Jennifer was perfect. Charlotte had originally met the Dukases in 2014 when she attended the NCM Bash with her mom, Carol.

You might be thinking ‘OK, so you traced all the owners of a Corvette… and?’ It’s the camaraderie that makes this a unique story. All four couples are not only Lifetime Members of the National Corvette Museum, they are also all volunteers at the Museum, and all remain good friends – looking forward to each Museum event where they can meet up, and see Jennifer again. It’s just another example of how the Corvette brings us together!

Does Jennifer’s story of getting around end here? Hillary says yes – she has no intention of selling her whatsoever.