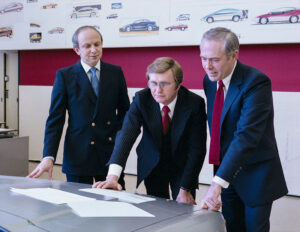 One of the most common responses we hear when a Hall of Fame class is announced are the words “long overdue.” With only one person (typically) selected in each category, it can take years and even decades for someone to make it from nominee to inductee. For every person chosen, there are several others who are deserving, but waiting with their families, friends and supporters for another year. This is the dilemma all Hall of Fame committees face, but until a better way is conceived, some inductions will continue to wear the label of being “long overdue.”

Once such person is Henry Haga. Henry was the Chief of Chevy 2/3 Studio from 1963 to 1974. In addition to leading the effort to productionize the design the third generation Corvette, he also worked on race cars, Camaro, Monza and mid-engine concept Corvettes. All along though, he made another contribution to Corvette that would reverberate all the way to the Corvettes of today, by mentoring future Corvette Design Team legends like Jerry Palmer, Randy Wittine, and John Cafaro, who would go on to mentor Tom Peters, Kirk Bennion and other designers.

Henry was born on January 22, 1931. As an only child growing up in Milwaukee, Wisconsin, he entertained himself by drawing cars, boats and airplanes. Before he was even old enough to drive a car, he bought one so that he could work on it. He even set up a bank account specifically for saving up for a better car someday.

Henry would go to the University of Wisconsin, and then joined the Army where he served for three years. After that he would pursue his dream of designing automobiles by attending the Art Center College of Design– the breeding ground of automobiles greatest designers. General Motors kept an eye on what was going on there, always watching out for new talent, and when Henry graduated in 1953 with his degree in Industrial Design, he was hired in to work in the Experimental Design Studio.

Corvette was the goal for him though, and in 1963, Design VP Bill Mitchell gave him the job of Chief of Design for Chevy 2/3 studio, the place where Corvette, Camaro, and Monza were designed.

As a sports car enthusiast, with a special love for Ferrari and Bugatti, the opportunity to become the Chief of the Corvette Studio was a dream come true for Henry. “Mine was the most coveted job in all of the design staff,” Henry wrote. “It was a fresh studio, with a new product name, the Sting Ray, and a whole set of new responsibilities for me. The Corvette meant the epitome of design and performance in the GM line. Another exciting part of it was that I was given a company car with the appointment, and of course, it was a Corvette.”

For Henry, what really made his job special however, was the people he worked with. “The other aspect of this new appointment that I appreciate was the caliber of the people. Most of the people in the Chevy 2 studio were car freaks. The sculptors, the engineers and the designers were all truly in love with the automobile. There was a special camaraderie amongst ourselves in relation to the car.”

It was his love for sports cars, both foreign and domestic that led to a great relationship with Corvette Chief Engineer Zora Arkus-Duntov. Back in the days when engineering and design departments didn’t have the close working relationship they have today, Zora and Henry were fast friends. Randy Wittine, retired designer and member of the Corvette Hall of Fame recalls how well they got along. “Hank had a great relationship with Zora Duntov, and Zora was always in Hanks office with some project to help with.”

“Zora loved Henry,” confirms Jerry Palmer, Retired Executive Director of Design and Corvette Hall of Fame member. “As Henry’s assistant, I often was amazed that I would be in the same room with Zora, Bill Mitchell and Henry—three Corvette giants—as they discussed, argued and joked about the Mid-Engine Corvette. What memories.”

Jerry is quick to make it clear that Bill Mitchell was the driving force behind the design of all Corvettes. “Bill Mitchell ran those studios like they were his own. When Bill wanted to work on something to do with the Corvette with any significance, he would build a studio within a studio to ‘keep everyone out who shouldn’t be screwing with our Corvette,’” Jerry chuckled. “There was a warehouse across the street and Bill had a studio built in there for special projects as well. The Mako Shark II Corvette came out of that studio designed by Larry Shinoda and Alan Young under Bill’s direction. It had a dramatic design philosophy that Bill really liked, and eventually it became the design theme for the 1968 Corvette.”

When the decision was made to productionize the Mako Shark II into a streetcar, the design work had to move from the secret studio to a proper studio, this time under Henry Haga. Henry was universally considered the master of proportion and began to reshape the car to allow for the mechanicals while taking in account production variables they don’t have to consider when building prototypes. In response to Zora’s concerns with the car about the front fenders being at a height that would obstruct the view of the driver, Henry found that happy medium that would make both Bill and Zora happy. In the end, his interpretation of the design direction of the Mako Shark II, helped to make it the most enduring version of Corvette in its history.

Henry would also work on Camaro, and in the early 1970s he worked on some concept Corvettes as well, including the XP 882, the Reynolds Aluminum Corvette and the 4 Rotor Corvette.

Zora came up with a drivetrain for the 4-Rotor Corvette, as Henry focused on its distinctive look according to Randy. “Hank was almost solely responsible for the design of the 4-Rotor Corvette. Jerry Palmer and I did design model proposals for Vice President Bill Mitchell’s evaluation but upon seeing our designs, Hank said that they were not quite what Mitchell would buy. He then designed a scale model of his own, and Mitchell okayed it, almost verbatim.”

With gull-wing doors, rear deck cooling vents, and a steep windshield, this car was longer, lower and wider that a production car, giving it a futuristic look that was still unmistakably Corvette. Zora would later say of the car, “Looking back on my twenty-year association with styling, this is the best design ever produced.”

Sadly, Henry would pass away in 1988 at 57 years old, but according to Hall of Fame member, John Cafaro, he left an indelible and lasting mark on Corvette. “Under Henry, the foundation of how Corvettes are designed were put in place and are still used to this very day.”

John remembers how Henry always had an eye on the future. “Most importantly, and unique to General Motors Design at that time, was Henry’s ability to recognize that the future of Corvette design rested on the ability to nurture and groom talented, passionate designers, to continue the work needed to insure the future of Corvette. Ultimately recognizing that for the Corvette to survive, it would have to be an international sports car in its shape and performance. He was a visionary who recognized that the world was changing, particularly in Europe in how the modern sports car would be redefined. It was not a secret that Henry was an avid Ferrari enthusiast and collector, but he never took his eye off the Corvette, and what the marque could become in the future.”