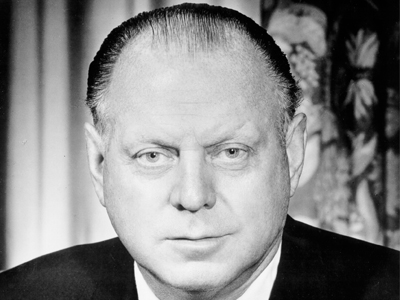 Harley Earl is the father of the Corvette. The Corvette was his idea pure and simple. He was influenced after World War II watching Jaguars and MG’s run road-racing courses like Watkins Glen. He felt America needed its own sports car and he convinced GM to develop its own, inexpensive two-seater.

Originally code named “Project Opel”, Earl kept the Corvette program pretty much to himself. He had a special small studio with a handful of people working on it. At the time, Earl wasn’t sure which GM division ought to sell the Corvette, But he felt close to Ed Cole at Chevrolet and decided to give the “Bowtie Division” first shot. Cole was sold the first time he saw the prototype. He knew it was just what the stodgy Chevrolet division needed.

The Corvette debuted at Motorama in New York, January of 1953 and was an instant hit. Six months later the Corvette went into production and the rest is history. But the Corvette may not have been Earl’s greatest achievement. His main accomplishment was making automotive design an institution. It was the work of Harley Earl that put the sizzle back into the American car business after World War II. His expressive designs defined an entire era. He was the first man to design a car with a wraparound windshield, cars without running boards, and the first to tantalize the motoring public with dream cars like the 1938 Y Job and the 1951 Le Sabre.

He grew up in Hollywood in the early 1900s and quickly developed designs with a flare for the dramatic. His father ran a custom coach building company, and young Harley was put to work- as Chief Designer. He would often produce clay models for customers, showing them what their future vehicles would look like. Earl later became close friends with Lawrence Fisher, who became president of the Cadillac Division of General Motors in 1925. Fisher asked Earl for some design help on the new LaSalle. His successful design caught the attention of GM Chairman Alfred B. Sloan.

Harley moved to Detroit in 1927 and quickly set about making GM one of the world leaders in design. In 1937, his Art and Color department was renamed General Motors Design Staff. Among Earl’s most memorable designs are the Chevy Nomad, the Cadillac Eldorado Brougham, all of the early 1950s Buicks and of course, the Corvette. Earl’s legacy, however is the Corvette which will live on as a testimony to his vision and his talent. Harley Earl died on April 10, 1969.