On Friday, September 3rd, Harlan Charles, Corvette Product Marketing Manager, was on-site at the National Corvette Museum to present a Corvette Team Update for the Museum’s 27th Anniversary Event. Charles began his presentation by reflecting on the many awards that Corvette has won in the past year, like the 2021 JD Power IQs Study that placed the Chevrolet Corvette as the highest-ranked vehicle in the Premium Sporty Car category. Charles shared that they are extremely proud of what they have accomplished so far and that they will continue working to create everyone’s dream sportscar. 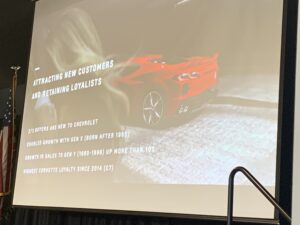 The Corvette Team strives to attract new customers while also retaining loyalists. They are doing well at attracting a new generation with two-thirds of buyers being new to Chevrolet, having doubled growth with Generation X, growth in sales to Generation Y, and the highest Corvette loyalty since 2014. Charles encouraged current Corvette enthusiasts to graciously welcome the new generation of Corvette lovers that are starting to come along!

Charles then moved on to what is to come in 2022! Back at the 2021 Michelin NCM BASH, they announced three new paint colors: Hypersonic Gray Metallic, Amplify Orange Tintcoat, and Caffeine Metallic. This makes a total of 12 colors for the 2022 line. Back at BASH, they also announced the new low-profile spoiler that is available for the 2022 models. Charles mentioned again that this new spoiler is available without the Z51 performance package. 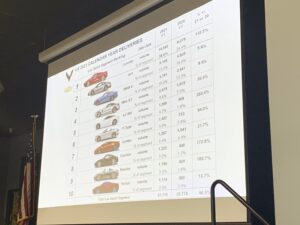 Earlier in the summer, the 2023 Z06 was announced. Charles shared a couple of exciting promotion videos, including one that shared that October 26th, 2021, is the OFFICIAL reveal date for the new 2023 Z06. The Corvette Team has been doing testing for the 2023 Z06 across America and Europe and are overly excited to show everyone the new car!