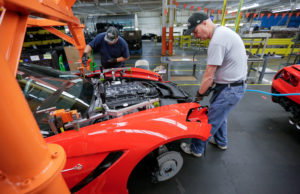 General Motors announced today that it will invest $290 million into the Bowling Green Assembly plant. The project will help employees continue improving build quality of the iconic Corvette and give the company greater manufacturing flexibility. This investment together with the technology and manufacturing process improvements made by 2015’s paint shop announcement contribute to GM’s drive for flexible manufacturing systems and improved customer experience. These changes will be made in conjunction with and in addition to the new paint shop and additional facility upgrades announced in 2015. Work is scheduled to begin this summer.

“GM has a long tradition of commitment to southcentral Kentucky and to producing, in Warren County, the finest sports cars in America,” said Gov. Bevin. “This benefits our entire state, both as a source of pride and as a tremendous contributor to our economy.”

“For 35 years, the Bowling Green Assembly Plant has provided jobs to thousands of Kentuckians and to hundreds of suppliers and vendors. We congratulate GM and offer our commitment to lending them support for this project and any others they may undertake in the future,” continued Gov. Bevin.

GM began Corvette production at the Bowling Green plant in 1981. The facility has remained the exclusive home of the Corvette ever since. With more than 1.6 million produced since 1954, international recognition as America’s sports car and the official sports car of Kentucky, the Corvette is the world’s longest-running, continuously produced passenger car. In 2015 Corvette sales reached 36,000.

“The Bowling Green Assembly plant has been a Warren County icon since production began in 1981,” stated Judge Executive Mike Buchanon. “GM has grown to employ over 900 South Central Kentucky residents. The continued investment in the plant and our community is instrumental in shaping the automotive industry in our region. We appreciate GM’s support and commitment to our local economy and we look forward to Corvette’s continued success in Bowling Green.”

“Bowling Green is known for many things, but none as notable as being home to the Corvette,” stated Bowling Green Mayor Bruce Wilkerson. “I congratulate GM and all employees at the Bowling Green Assembly Plant for their continued growth and success. Bowling Green is proud to be the home of America’s sports car.”

For more than 30 years, the Bowling Green Assembly Plant has positively impacted the community. As a landmark along Interstate 65, the Bowling Green Assembly Plant and the National Corvette Museum drive tourism for car enthusiasts, tourists and citizens alike. In 2015, the Corvette Assembly Plant reported 53,738 tourists from around the world visited the plant to see American manufacturing firsthand. The National Corvette Museum attracted 221,000 tourists to Bowling Green and Warren County in that same year. In March, Trade & Industry Development magazine recognized GM as one of 15 companies across the nation to receive their 10th annual CiCi award for Corporate Investment as a result of the $483 million investment GM made in the Corvette Assembly Plant in 2015.

“This $290 million investment is the largest single investment by a company so far this year in Kentucky,” stated Bowling Green Area Chamber of Commerce President and CEO, Ron Bunch. “In the last two years alone, GM has invested over $770 million in the Bowling Green Assembly Plant. Significant investments such as this indicate the strength of the South Central Kentucky economy. I want to thank GM, and Bowling Green and Warren County officials for their hard work and commitment to the future of our community.”

This is the fifth economic development announcement for South Central Kentucky in 2016 with $355.7 million in capital investment and 170 new jobs created. For more information on the South Central Kentucky Industrial Park or the Chamber of Commerce, contact Bowling Green Area Chamber of Commerce President and CEO, Ron Bunch, CEcD at [email protected] or (270) 781-3200.