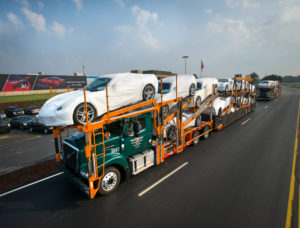 A truckload of 2014 Corvette Stingrays leaves the General Motors Bowling Green Assembly plant in Bowling Green, Kentucky, where the Corvettes are made. (Photo by Joe Imel for Chevrolet)

GM’s Corvette Assembly Plant in Bowling Green has received recognition by Trade & Industry Development magazine for their 2015 investment of $483 million for facility upgrades and expansion plans. According to the magazine, the company’s investment was one of the top 15 in the nation.

The CiCi Awards are unique in that, in addition to commemorating the largest capital investments for development or expansion announced within a designated year, they equally recognize projects for the positive, often transformational, impact they will have on a community, regardless of the amount of money invested by the corporation.

The 30 corporate recipients of the 2016 CiCi Awards were selected based on their announcements of plans for economic development projects during 2015. These commitments to economic development will collectively create almost 22,000 jobs and result in total capital investment in excess of $13.7 billion.

“For General Motors to be selected from a pool of hundreds of applicants for the 2016 CiCi Awards is a huge honor. The Corvette Assembly Plant has been a manufacturing and tourism staple in South Central Kentucky for 35 years.” Judge Executive Mike Buchanon stated. “We extend our most sincere gratitude to General Motors for the support they provide to our region and to Trade & Industry Development for the much deserved recognition.”

GM began producing the Corvette at its Bowling Green facility in 1981 and the facility has been home to the iconic brand for over 30 years. Known around the world as America’s sports car, the Corvette is the world’s longest-running, continuously produced passenger car with more than 1.6 million assembled.

“The success Corvette has experienced over the years is no coincidence. Corvette is one of Kentucky’s most recognized assets and truly is an American icon,” stated Bowling Green Mayor Bruce Wilkerson. “Bowling Green is the home of the Corvette and thanks to GM’s faith in our community, demonstrated by their 2015 investments, will continue to be for many years to come.”

Due to the success of the Corvette Z06, GM is investing over $439 million to expand/improve the Bowling Green Assembly Plant. When completed, the new 450,000 SF facility will make up nearly half of the plant’s total operation. The Corvette Z06 accounts for nearly a third of all Corvettes produced at Bowling Green Assembly. Improvements include substantial upgrades in technology, including new tooling, robots and state-of-the-art environmental and efficiency enhancements to the paint shop.

Additionally, GM is investing $44 million in the Bowling Green Assembly plant to support increased capacity of its Performance Build Center, adding 36 new jobs. The Performance Build Center offers a “Build Your Own Engine” program that provides customers the opportunity to assemble a 650 horsepower engine for their new Corvette.

“General Motors’ investment in the Corvette Assembly Plant was not only the largest single investment made by a company in Warren County, but was the largest investment in South Central Kentucky and second largest in the state of Kentucky in 2015,” reported Ron Bunch, President & CEO of the Bowling Green Area Chamber of Commerce. “This investment made up over half of the total capital investment in South Central Kentucky last year and is an indicator of the confidence GM has in the community, their workforce and the future of the Corvette. We are elated that Trade & Industry Development included GM’s investment as one to include in the 2016 CiCi Awards.”

In total, GM received three nods in the 2016 CiCi Awards for Corporate Investment including improvements to their facilities in Arlington, Texas and Roanoke, Indiana. For more information about the 11th Annual CiCi Awards visit www.tradeandindustrydev.com.

Economic development is strong in South Central Kentucky.  So far is 2016, the Chamber has announced capital investment of $19 million and the creation of 65 jobs.  In 2015, the Bowling Green Area Chamber of Commerce announced 23 projects, 1,040 new jobs and a total capital investment of over $943.7 million – the largest total announced investment of expansion projects in South Central Kentucky in the last ten years. Warren County finished 2015 with the second, third and tenth largest expansion projects in Kentucky, including both the second largest investment project and second largest job creation project for 2015.