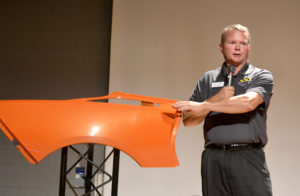 Today GM has released the final 2018 Black Rose Corvette numbers. A total of 219 saleable / retail Corvettes (165 coupes and 54 convertibles) were produced in the shade – 92 were Stingrays, 78 were Grand Sports and 49 were Z06s. For model year 2017, 1333 Corvettes were Black Rose. The last Black Rose, a Stingray Coupe with gray interior, automatic transmission, gray calipers and 1LT package, rolled off the line on July 27, 2017, just before the planned 3-4 month production shutdown for retooling.

Replacing the color is the new Sebring Orange Tint Coat, which made its debut at Corvettes at Carlisle on August 25, and was shown again to the attendees of the National Corvette Museum’s Anniversary Celebration the following weekend.

According to Corvette Product Marketing Manager Harlan Charles, people had been pressing him at the Michelin NCM Bash for a few years for a fun, flashy color like a bright orange, but brighter than the Daytona Sunrise. GM Design developed the color in 2015 and had been waiting for an opportunity to bring it to market.

“It matches an Orange Crush can and doesn’t photograph as accurately,” said Wendy Miller, Model Option Forecaster. “It’s fun and metallic and is a color that needs to be seen. It was launched at Carlisle with pretty universal excitement!”

The new shade should be available to order in mid-October for a planned December production time frame.