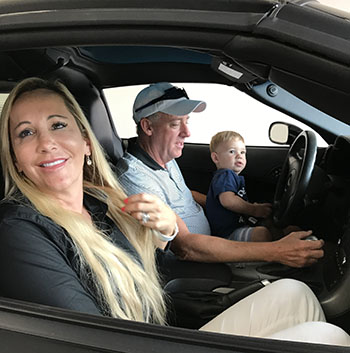 Randy Head checks out his new Corvette with wife Stacy and grandson Maverick.

Neckties, cologne, tools, grilling supplies, a card – most of us pick-up a small item that may or may not be very meaningful for dad on Father’s Day. But for one Owensboro, Kentucky man – he received the surprise of a lifetime.

Randy Head has been a fan of Corvette most of his life, with the second and fourth cars he ever owned being the iconic sports car. But as life happens, and kids come along, like many people he no longer had a Corvette. For a long time, Randy would say that he was going to get another Corvette ‘one day.’

“Dad always would say he wanted a Corvette to be he and mom’s travel car, but he never made time to buy it,” said son Ben.

Randy’s wife Stacy decided she was going to change that with the best surprise ever. “Dad didn’t know I was coming in for Father’s Day weekend, and mom hid the car in the garage,” said Ben.

Needless to say, Randy was quite surprised when Stacy opened the garage door, and sitting there was a 2006 Black Coupe. Ben was able to catch the exciting reaction on camera as Randy checked out his new ride with grandson Maverick and daughter Whitney also joining in (warning – very ‘excited’ language used!).

We hope Randy’s reaction puts a smile on your face like it did ours!