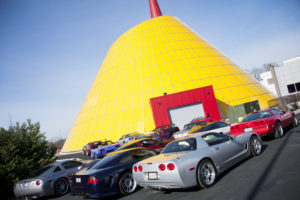 In 1987 Corvettes got a little faster thanks to engineers at Callaway Cars. What started in the garage of Reeves Callaway’s Old Lyme, Connecticut home has grown into a company with three locations (Connecticut, California and Germany) and four core business units: Callaway Engineering, Callaway Cars, Callaway Carbon and Callaway Competition. When the company began, Reeves’ mission was not to enhance Corvette performance, it was to put food on the table for a young family in the only way he knew how. To build something beautiful and powerful that would appeal to the owners of fine automotive machinery. Reeves had a passion for making engines powerful, and in 1986 his company formally became allied with Chevrolet Corvette.

In celebration of Callaway’s 40th anniversary, and their 30th anniversary of their relationship with Corvette, the National Corvette Museum’s Exhibit Hall will be displaying 15 examples of this high-performance Corvette.

1987 Callaway Corvette RPO B2K #001 donated by Mead Briggs to the National Corvette Museum
The Callaway Twin-Turbo Engine Package introduced in 1987 was not a factory-installed option, but could be ordered through participating Chevrolet dealers as RPO B2K. Of the 188 built, only three were automatic transmissions. The option gave the Corvette ratings of 345 hp, 465 lb. torque and a top speed of 177.9 mph.

1988 Callaway Corvette RPO B2K #88-051, the Callaway Sledgehammer Corvette on loan from the Berry Collection
The Sledgehammer project began after Car & Driver’s ‘Gathering of Eagles’ test event where Reeves Callaway drove the famed ‘Top Gun’ Callaway Twin Turbo to a maximum speed of 231 mph to win the contest. Reeves was determined that the car used in the next event must feel like a normal Corvette with low speed drivability and working options, including A/C and radio – and the car had to be driven to the event. This street legal Corvette remains the world’s fastest – even today – reaching 254.76 mph.

1991 Callaway Corvette RPO B2K on loan from the Berry Collection
Near the close of RPO B2K Callaway Turbo Corvette production, Callaway began to build the cars as ‘Series 500’ cars with unique color combinations, special paint and other Callaway options. This Perriwinkle Purple Callaway was originally ordered in late 1991 for Callaway dealer, Purifoy Chevrolet in Colorado to display in the showroom. Built as Callaway Twin Turbo #501, the car is one of only a handful of Series 500 RPO B2K Callaway Corvettes with unique colors and trim, and an ultra-rare 100+ Package.

1990 Callaway Super Speedster on loan from the Berry Collection
Build using a 1990 ZR-1 as its foundation, this is the first of only two Series II Super Speedsters constructed by Callaway. It features a unique wider Callaway AeroBody with flared rear fenders, Cherry Smash Red paint and ‘My Favorite Blue’ interior. Every inch of the inside of this car is richly covered in leather and wool! The twin turbo LT5 engine produces 750 hp.

1996 Callaway Supernatural 450 Corvette – Grand Sport, on loan from Randy and Judy Flock
This 1996 Grand Sport is the only one with the Callaway ‘SuperNatural’ engine and Callaway Aerobody, giving it 450 hp and 383 cid. Even though the 1996 Corvette was the last of the fourth generation, it regained the top spot (after two years in second place) in AutoWeek magazine’s annual subscriber survey of American cars in which readers had the most pride.

Other cars to be exhibited include: 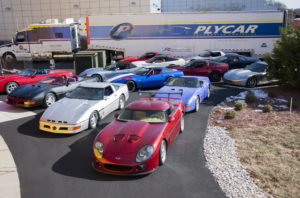