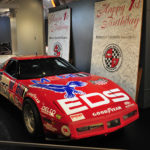 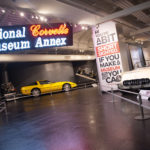 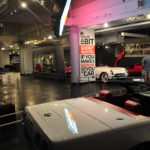 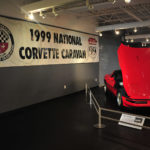 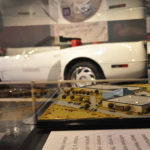 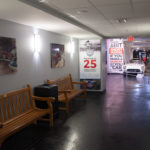 All stops have be pulled out for a special Anniversary exhibit, which includes a variety of special Corvettes along with archival items from the NCM Grand Opening, and original items from the first Corvette caravan. The exhibit includes the original neon sign from the Corvette Annex, the store in Bowling Green that publicized the NCM, then in its planning stage, and provided a source of income for the nascent Museum which kept the ball rolling during its gestation.

One of the first cars donated to the Museum, a 1978 Pace Car Edition, is on stationary display. As you may already know, the ’78 Pace Car Edition was Corvette’s first-ever limited production, special in celebration of Corvette’s 25th Anniversary and it also marked the first time Corvette was selected to be the official pace car for the Indianapolis 500. Many other special Corvettes are currently displayed including:

The record-breaking ZR-1 was displayed at the NCM Grand Opening in 1994 and its accomplishment convinced everone that Corvette was a bona fide world-class sports car. The substantially stock 1990 ZR-1 shattered three FIA world speed records in March of 1990. New international speed records were established when the ZR-1 averaged 175.710 miles per hour for 5,000 km; 175.885 mph for 24 hours; and 173.791 mph for 5,000 miles. It was a remarkable accomplishment! You’ll also get a peek under the skin of the “King of the Hill.” The ZR-1 cutaway, shown as part of the ZR-1’s international debut at the 1989 Geneva Auto Show and which was displayed at the Museum’s Grand Opening, is part of this Anniversary exhibit.

Putting together this display was a trip back through 25 years of Museum history for Moore and the Collections team. “I think the two coolest pieces are that architectural model, and the neon Annex sign. The model gives a look at what a different building could have looked like, a different approach.”

Whether this is your first time visiting the National Corvette Museum, or your more than 25th visit, you’re sure to see something new as part of this exhibit. “Many of the artifacts we have on display have never before been shown to the public, or it’s been a VERY long time since it has been display,” added Moore. “For many of our Founding members, this exhibit will make them proud to see how far we have come.”