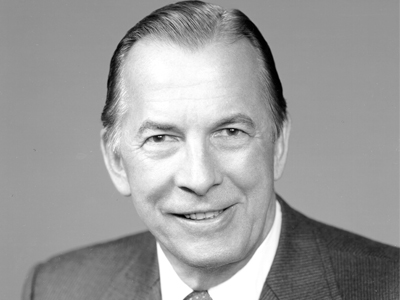 Ed Cole’s motto was: “Kick the hell out of the status quo.” He lived it every day. As president of GM and former Chief Engineer of Chevrolet, he was a dynamo. He was articulate. He thought big. He talked big. He got people to do big things. He was mischievous, a maverick, softhearted, hard-nosed when he had to be. He had a quick wit and a quirky grin and uncanny automotive instincts. He thought cars and trucks should get up and go. Quickly. He made “dash” and “daring” Chevy by-words.

He didn’t invent the Corvette. It was already a clay model when he first saw it. But he recognized it instantly as the ideal symbol of a soon-to-be reborn Chevrolet marque. The Corvette was exciting. But what really excited Ed Cole was the bizarre notion that such a car-two seats, plastic-bodied, six months from drawing board to driveway-could come from GM’s conservative car division. What a way to launch the new Chevrolet.

Of his 47 years at General Motors, only 10 were spent at Chevrolet, but they were Chevy’s post-war growth years and they formed the foundation for the division’s continued dominance of the American automotive scene. His stated task when he became Chief Engineer in May, 1952, was to bring a light-weight low cost V8 into the Chevy engine lineup. He did. It was called, simply, the Chevy small block. For the next 50 years, it would reign supreme as America’s most significant automotive engine design.

As Chief Engineer and later as General Manager, Cole made Chevy thunder the heartbeat of America. In 15 months, he tripled the size of the engineering staff. He permitted Zora Duntov to install the V8 in the ’55 Corvette. When the car bombed in the marketplace, he cleared Chevy to go racing. First, the February, 1956 Daytona Beach trials, then the Sebring 12-hour, next Jerry Earl’s SR-2, and lastly a factory-prepared car for Dr. Dick Thompson, the flying dentist.

Embarrassed at Sebring in ’57 when the beautiful SS Corvette proved vastly unready, he would later allow GM styling boss Bill Mitchell to wrap a swoopy body around an SS test “mule”, call it a Sting Ray, and turn it into what-in retrospect-is the most important racing Corvette of them all. With Dick Thompson doing most of the driving, the Mitchell Sting Ray kept the high performance flame alive at Chevy in ’59 and ’60 and set the stage for the production Sting Ray era.

A mischievous Cole was the architect of Chevy’s back-door stock car racing escapades of the late ’50s. The 348 and the 409, first big-block engines, were designed during Cole’s tenure at Chevy. He coached the small-car Chevy program into existence as well as the vehicle of which he was most proud and for which he may be best remembered -the Corvair. Low, light, rear-engine, air-cooled, the Corvair was in keeping with much of the Cole’s philosophy about cars. Like the Corvette, the Corvair “kicked the hell out of the status quo.”

Cole left Chevy to become GM group vice-president in 1961. Promoted to Executive VP in ’65 and to the presidency in ’67, Cole found himself at the helm of GM. high performance took on an altogether different meaning. It meant tuning engines for fuel economy, not power. It meant stouter bumpers, catalytic converters and the like. Under Cole’s leadership, GM became the world leader in safety research. His 1972 declaration that all GM cars would be equipped with catalytic converters in 1975 spelled-at long last-the end of lead in gasoline. On his retirement in 1974, Ed Cole could look back on a career of kicking the hell out of the status quo, and the world-Corvette included-is far better off. Ed Cole died in a light plane crash in May, 1977.