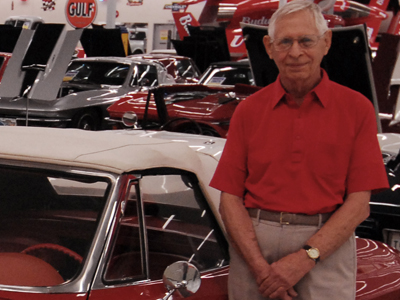 Duane Lloyd “Sparky” Bohnstedt was born in Beatrice, Nebraska February 18, 1924. His father worked for a Chevrolet dealer as a mechanic and later service manager. He first became interested in designing automobiles in the early 30’s when his dad built him a small race car, with a Chevy grill.

In 1951 Sparky was hired by Oldsmobile as a Junior Designer, and months later transferred into Chevrolet to work for Harley Earl’s original Design and Styling department. In 1955 he went to work for Packard where he hired a designer named Larry Shinoda to work with him. Eventually Sparky wanted to return to GM, but they had a strict rule that if you left, you could never come back. Harley broke this rule, making Sparky the first person in 27 years to be allowed to return.

In 1959 he was tasked with giving the Corvette a facelift. His team developed a completely new Corvette as a roadster, but money problems caused the new features to launch in phases. The rear end was changed in 1961 and the front end with the retractable headlights completed the redesign in 1963. Sparky eventually became Exterior Designer of Commercial vehicles until his retirement in May 1984.